Italy Defender Leonardo Bonucci Once Chased Down A Gun-Wielding Robber, May Actually Be A Madman 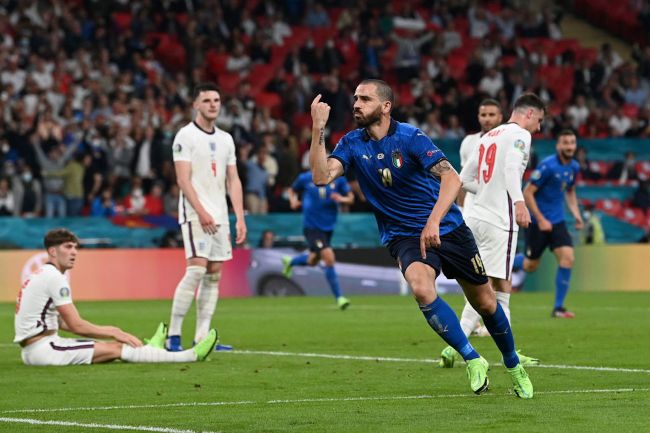 Italy won the Euros on Sunday, and let me tell you something, it was an absolute scene over here in the tri-state area, perhaps the most Italian region of the country (this is not an actual fact, don’t fact-check me). I live in Hoboken, which is sort of a mini-city across the Hudson from Manhattan — Frank Sinatra was born here, maybe you’ve heard of him — and I was literally running through the streets as the city decided to shut down a couple of blocks to accommodate for the viewing parties. I was high-fiving and hugging strangers left, right, and center. Everyone in blue was now a family member. Like Fast and Furious without the explosions — one big familia.

What makes the Euro 2020 victory so thrilling for Italy is the fact that this is a proud footballing nation that, just three short years ago, failed to qualify for the 2018 World Cup. For a country with a football history as rich as Italy’s, missing out on a World Cup — something they hadn’t done for 60-something years — was an unmitigated disaster. To make matters worse, that World Cup was seen as the final hurrah for generational players such as Daniele De Rossi and Gianluigi Buffon. Stalwart centerbacks Giorgio Chiellini and Leonardo Bonucci (36 and 34-years-old, respectively) were a part of that old guard, so to see them get the international trophy that their storied careers deserve was the cherry on top of a truly thrilling month for Italians across the globe.

Other than being two of the world’s truly elite defenders, what makes the combination of Chiellini and Bonucci so enjoyable is that not only form a genuine partnership, as the pair also start together for Juventus, but that they are wildly different personalities.

Chiellini, for example, recently went viral for his treatment of Spain’s Jordi Alba just prior to the Italian’s penalty shootout victory in the semi-final. In what was supposed to be the highest pressure of sporting moments, the soon-to-be 37-year-old — who appears as though he’s been that age his entire life — could barely contain his childlike glee as he wrestled and likely mind-gamed his Spanish counterpart:

Jordi Alba, not so much. pic.twitter.com/yjl04Ngtvw

With a degree in economics and commerce, Chiellini has described himself as “serene”. Leonardo Bonucci, for better or for worse, is essentially the opposite, as the rugged 34-year-old, who scored the Italians’ equalizing goal, was quite open about his distaste for the “It’s Coming Home” song following Italy’s victory:

'Sorry, but the cup is taking a nice flight!' 🤷‍♂️

'It will fly towards Rome!' 🇮🇹

As it turns out, Bonucci’s reputation as the madman of the two is actually quite fitting: back in 2012, Bonucci — then “just” 25-years-old — beat up and then chased down a gun-wielding assailant who tried robbing him while he was Ferrari shopping with his family:

The Italy international was with his wife and baby son at a car dealership in Turin on Thursday, looking to buy a Ferrari, when a man with his face covered pointed a gun at his head and demanded that he give him his watch.

Bonucci refused and instead punched the thief, knocking him to the ground before chasing him as he tried to get away on a scooter with his accomplice. [via Reuters]

Perhaps best of all is what the assailant allegedly said as Bonucci was chasing him: “What are you doing? Are you mad? I’ll shoot you.” That’s the type of man (and possible crazy person) you want in your locker room when the going gets tough.