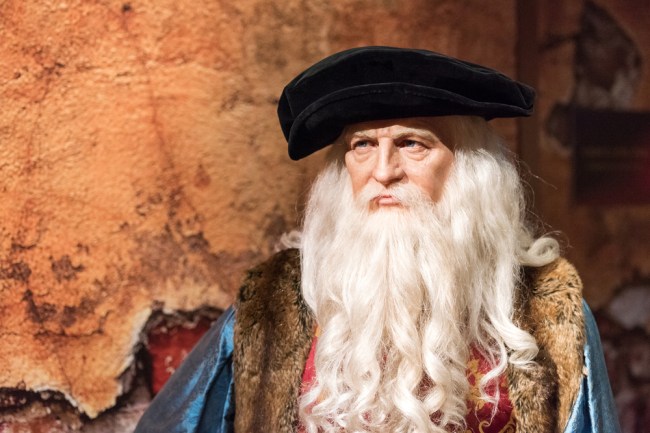 Few names throughout history are remembered as well as Leonardo da Vinci’s. He was a true genius, not one of those fake ‘I can pass a MENSA test, I swear!’ geniuses in the news. He was a jack of all trades who excelled in sculpting, music, mathematics, engineering, writing, astronomy, and painting (to name a few).

‘Salvator Mundi’ by Leonardo da Vinci was once lost from the world. It was later sold for just $60 in 1958 at Christie’s Auction House. In 2011, the art world realized what they had on their hands, a genuine painting by Leonardo da Vinci. It was heralded as “the greatest artistic rediscovery of the 21st century” according to CNN.

Now, this painting is back on the auction block and will be sold at Christie’s next month where it’s expected to fetch over $100 million. Naturally, the resurfaced ‘Salvator Mundi’ Leonardo da Vinci painting is a depiction of Jesus Christ. That’s pretty much all Art was before the 19th century. But this a da Vinci!

“The ‘Salvator Mundi’ is the Holy Grail of Old Master paintings,” said Alan Wintermute, Christie’s Senior Specialist of Old Master Paintings. “Long known to have existed, and long sought after, it seemed just a tantalizingly, unobtainable dream until now.”
Da Vinci painted the image of Jesus Christ at about the same time as the “Mona Lisa” — around 1500. It adorned the walls of royal palaces before disappearing towards the end of the 18th century. By the time the painting resurfaced in 1900, its origins had been forgotten. (via CNN)

If I’m being honest, I think that 99.9999% of Art is complete bullshit and just another way for rich people to tuck away money in assets. But, this is a Leonardo da Vinci painting…It’s hard to argue that something made by one of history’s most famous individuals isn’t worth a fortune, so I can totally wrap my mind around this painting selling for over $100 million because, frankly, there are a ton of billionaires in the world at this point and a lot of people out there who can afford this.

Before being auctioned off on November 15th at Christie’s in New York the painting will travel to Hong Kong, San Francisco, and London. This presents a prime opportunity for an Ocean’s 12 style heist from expert art thieves but I’m sure this painting will travel with better security than the pope.