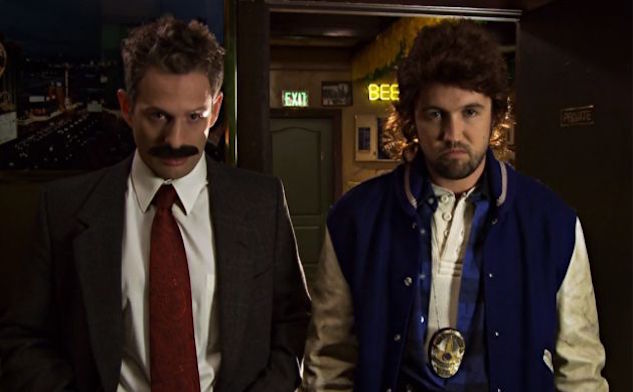 There’s absolutely nothing Hollywood loves more than stumbling upon a successful formula and proceeding to milk it until its udders are irreversibly chafed, and over the years, studios have managed to make boatloads of money by releasing almost the exact same film over and over again aside from some cosmetic tweaks.

There are a number of tried and true genres out there, like Nerdy High School Girl Gets Hot (Despite Actually Being Hot The Entire Time), Michael Bay Surrounds Famous Actors With Explosions, and Unathletic Kids Get Better At Sports Because “Yay Teamwork!” (the last of which will likely serve as the basis for the upcoming Mighty Ducks series).

However, I’m not sure if any of those categories have become as ubiquitous as Buddy Cop movies, which revolve around two police officers with seemingly irreconcilable differences who (surprise!) overcome their disagreements to defeat crime while engaging in some wacky hijinks along the way.

Michael Bay tried his hand at this genre when he introduced the world to his signature style with Bad Boys but he took some inspiration from a number of similar films to come before it including Tango & Cash, Beverly Hills Cop, and Lethal Weapon.

Most buddy cop movies feature their fair share of humorous moments but they’re so rife for parody that they’ve served as the basis for some more overt comedies including The Other Guys, Hot Fuzz, and the incredibly meta reboot of 21 Jump Street.

However, as far as I’m concerned, nothing will ever top the treatment It’s Always Sunny in Philadelphia gave the genre with Lethal Weapon 5.

In season six’s “Dee Reynolds: Shaping America’s Youth,” Mac and Dennis set out to bring a fifth installment of the Lethal Weapon franchise into the world and do so in the form of a film that features terrible accents, even more terrible blackface, and a sex scene with Danny DeVito ripped straight out of The Room, another movie that’s so bad that it’s actually a masterpiece.

It’s been 22 years since Lethal Weapon 4 hit theaters, and while you’d think Hollywood wouldn’t bother trying to top what they did in It’s Always Sunny, it appears it’s still going to try, as Collider reports an official Lethal Weapon 5 is on the verge of becoming a reality.

I assumed Danny Glover was officially too old for this shit and that the racists tendencies Mac and Mel Gibson share would have kept studios away but I guess that’s not the case, as the duo is preparing to team up again and join forces with director Richard Donner for what is slated to be the final Lethal Weapon movie.

A story has already been written, and while the script still needs to be finalized, sources say it’s only a matter of time until production officially starts.

I wish them all the best of luck in outdoing The Gang because they’re certainly going to need it.