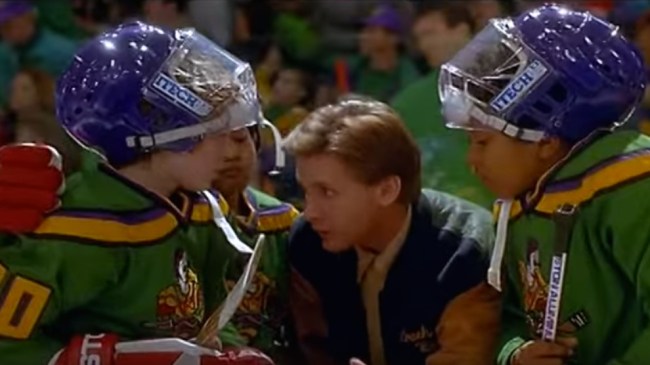 In the early 1990s, Hollywood decided to go all-in on movies centering around a ragtag group of youths gifted with underwhelming athletic talent (aside from the one ringer who outshines the rest of their teammates) who manage to defy their underdog status by coming together to defeat the comically evil opponents who took great joy in mocking them at every turn.

This formula served as the basis for Little Giants and The Big Green but neither of those films came close to having the cultural impact that The Mighty Ducks did when it was released in 1992 (nor did either of them eventually lend their name to a professional sports franchise).

The Mighty Ducks may not have been met with critical acclaim when it first hit theaters, but when you consider the powers that be in Hollywood decided it would be a good idea to give Crash an Oscar for Best Picture, I don’t hold the opinions of those West Coast elites in very high regard.

I’ll admit my vision may be slightly clouded by my nostalgia lenses but I recently rewatched The Mighty Ducks and personally feel like it holds up pretty well compared to some of its contemporaries. Sure, you’re probably never going to find it on the syllabus in any film class but it’s still pretty damn enjoyable.

As a result, I was pretty amped a couple of years ago when Disney announced the franchise would serve as the basis for an upcoming series but it wasn’t entirely clear how they were planning to approach it when you consider the cast has aged just a tad since the first film came out (especially the guy who played Goldberg, who followed in the footsteps of Gordon Bombay but was unable to convince a judge to let him coach a youth hockey league instead of going to jail).

Last month, we got our first hint at what to expect from the series, which will begin filming in February and will eventually come to Disney+. It will reportedly follow a teenager who sets out on a quest to form his own team, and while we still don’t know who his teammates will be, it would appear his coach will be none other than Gordon F’ing Bombay himself.

Emilio Estevez will reprise his role as Gordon Bombay in #DisneyPlus’ 'THE MIGHTY DUCKS' series! pic.twitter.com/FBEdg0BUVH

Emilio Estevez hasn’t appeared in a television series since showing up on Two and a Half Men in 2008 but I can’t think of a better way for him to stage a comeback than reprising what may be his most iconic role.

It’s currently unclear when the series will premiere but all I know is that day can’t come soon enough.