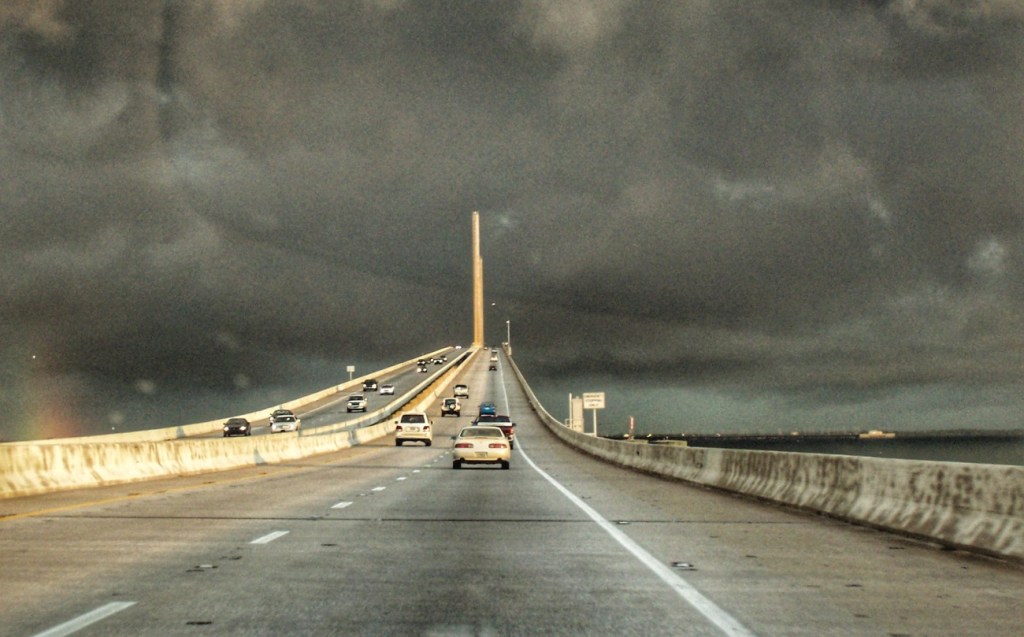 We’ve reached that point of the Summer in Southwest Florida where there are pretty violent thunderstorms every afternoon around dinner time. For the past three weeks, you could almost set your clock by the storms they’ve been so reliably on time.

Usually, I’m sitting inside when the afternoon storms roll in and not on the road. But on the days when I am driving somewhere, I typically feel pretty safe in my car. At some point in life, I was led to believe that lightning doesn’t strike cars or trucks because of the rubber in the tires and I took this as fact instead of fact-checking it.

I’ve been moderately sketched out by showering during lightning storms since I wrote about this incident back in May. A lightning bolt actually traveled through piping in an apartment complex and exploded a toilet. And all of the comments were from people whose parents taught them to never run water during a lightning storm.

Now there’s this truck struck by lightning and the video was captured on camera by a car driving behind the pickup truck and frankly, I’m getting a little spooked by lightning for the first time in my life.

Pickup Truck Struck By Lightning On The Highway (video)

According to Josh Cascio of Fox 13 News in Tampa Bay, this incident took place right near the world famous Sunshine Skyway Bridge back on July 1st. What I find pretty interesting about that is the Sunshine Skyway is pretty well west of the I-75 highway. And that highway seems to act as a magic line with storms being extremely violent on one side or the other but rarely on both.

I live on the east side of I-75 about 30ish minutes away from where this truck got struck by lightning and as I said above, my area has been getting absolutely crushed by lightning storms lately.

The Fox 13 News report says the driver of the car with the dashboard camera is named Michaelle Whalen and it was actually her husband in the pickup truck. After the lightning struck the pickup truck the husband ran back and hugged his family just to let them know he was okay and then they started sorting out all the damage.

Miraculously, nobody was injured.

The truck struck by lightning got ‘completely fried’ according to Whalen. Not a shocker. But it is surprising that a lightning bolt could come out of the sky, hit a truck on the highway, damage other vehicles, and somehow nobody was injured. And though everyone was safe, the Dodge Ram was his dream truck he’d wanted it “since he was a little kid” so that really stung.

Now that I’ve learned more about this story I went down a YouTube rabbit hole of ‘vehicles struck by lightning’ videos and there are more than I would’ve expected.

Maybe we should all be a little more aware of the possibility that lightning can strike our vehicles. I certainly dont’ want to end up in a ‘truck struck by lightning’ headline one day, mostly because it sounds like a massive inconvenience to then have to go get a new vehicle.