Can Nike Actually Win The Lawsuit It Filed Over The Blood-Filled ‘Satan Shoes’ That Sparked A Moral Panic? 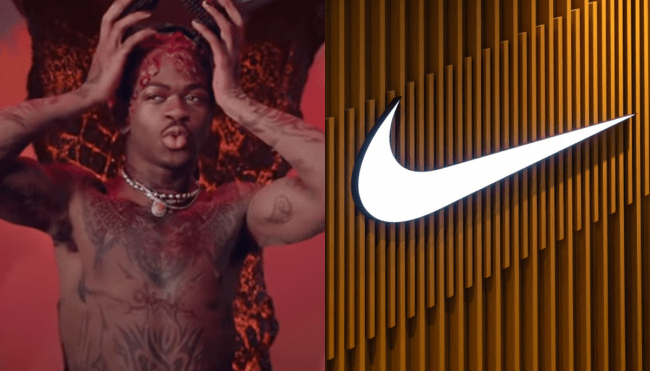 Musicians have a long and storied history of inciting a moral panic by riling up America’s pearl-clutchers with a little bit of help from Satan, ranging from the bands who were accused of corrupting the nation’s youth with references to devil worship that could only be heard when a record was played backward to the artists who’ve sprinkled their lyrics and music videos with references and imagery inspired by The Man Downstairs.

When you consider none of these occultist assaults have resulted in society collapsing as a result of Satanists instituting a New World Order or opening a portal to hell, it seems hard to believe that the topic is still capable of whipping insufferably righteous prophets of doom into a frenzy. However, it would appear that is not the case based on the furor that was recently sparked by Lil Nas X.

Last week, the man who went from running a Nicki Minaj fan account on Twitter to creating one of the most unavoidable hits ever recorded in the form of “Old Town Road” debuted a music video for a new song that featured him treating the Devil to the kind of dance that would normally be prefaced by a hefty withdrawal at an ATM with a $6 surcharge.

However, that didn’t come close to causing the kind of stir we were treated to over the weekend when he announced he’d teamed up with MSCHF to create 666 pairs of custom Nike Air Max ’97s that each contained a single drop of human blood.

It didn’t take long for the kind of people who take great joy in making fun of “triggered snowflakes” and bemoaning cancel culture on social media to express their disgust while calling for a Nike boycott even though the company released a statement that made it clear it wasn’t involved in the shoes’ design nor planning on giving them its seal of approval.

Lil Nas X has spent the past few days having an absolute field day on Twitter by calling out his many critics in hilarious fashion, and when you consider the shoes sold out in under a minute when they were released on Monday, it’s safe to assume he’s cackling all the way to the bank.

However, he may have trouble accessing those funds after Nike decided to escalate things by filing a lawsuit against MSCHF accusing the sneaker customization company of infringing on its trademark and attempting to capitalize on the reputation of the brand it believes was tarnished as a result of the sale.

Nike is suing MSCHF over the blood shoes: pic.twitter.com/inFLwU8k0q

So is there any chance Nike actually wins this? Well, It’s not the first time it’s taken similar action, as a designer who whipped up his own interpretation of the SB Dunk “Pigeons” last year was also hit with a lawsuit that led to him shelving his plans to sell them.

However, it’s worth noting those were built from the ground up as opposed to giving vintage pairs a bit of an upgrade. In fact, the filing said Nike decided to take legal action because they were “not legitimate customizations” but rather “illegal fakes,” so this is an interesting pivot for a corporation that has largely been fine with people altering its products. I’m not a legal expert, but at first glance, it seems like this is a pretty obvious attempt to do a bit of damage control that will allow Nike to safe face and probably end with both sides agreeing to a classic “settlement for an undisclosed sum” once the outrage dies down.

I doubt MSCHF is as thrilled with this development as it presumably is with the insane amount of press and publicity the stunt has been able to generate, but unless the lawsuit ends up leading the company to financial ruin, I doubt it’ll have any real regrets.