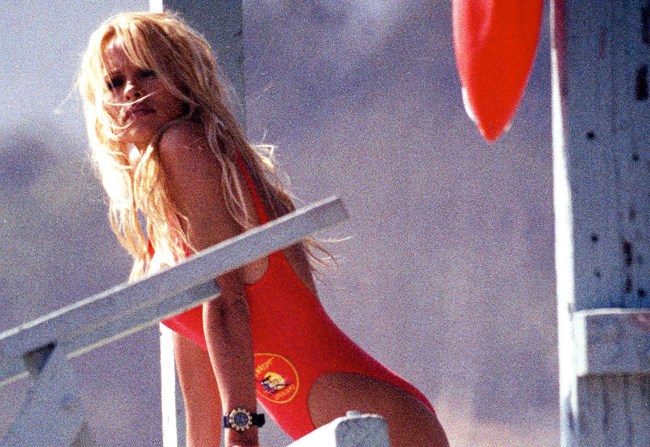 Last week, we brought you the truly incredible first-look at Sebastian Stan and Lily James as Tommy Lee and Pamela Anderson in the upcoming Hulu miniseries, Pam & Tommy (which also stars Seth Rogen and Nick Offerman).

Seth Rogen and Nick Offerman will also star in the miniseries.

While costuming and makeup certainly doesn’t make or break a series, when it comes to projects about contemporary, real-life human beings, making another human being look convincingly like that person is key in terms of believability. Remember Ashton Kutcher as Steve Jobs? Exactly.

Given the already impressive display from Pam & Tommy’s costume and make-up department, it should come as no surprise that further set photos from the series show James looking almost like a clone of Baywatch era Pamela Anderson, one of the most iconic women from the 1990s:

Lily James is a splitting image of Pamela Anderson on the set of Hulu's upcoming miniseries 'Pam & Tommy.’ pic.twitter.com/atY4YcA3DL

As mentioned above, not only will the series be starring Sebastian Stan and Lily James, but Seth Rogen will feature as Rand Gauthier, the man who infamously stole Tommy and Pam’s legendary sex tape. Parks and Rec star and general king Nick Offerman will also appear as a character named “Uncle Miltie”. In addition to those four, Pam & Tommy — directed by Cruella and I, Tonya director Craig Gillespie — also stars Taylor Schilling, Andrew Dice Clay, Pepi Sonuga, Spenser Granese, and Gail Chwatsky.

At this time, the Hulu miniseries (which began production in April), does not have an official release date. Given that filming is underway, though, a late 2021/early 2022 release seems most likely.