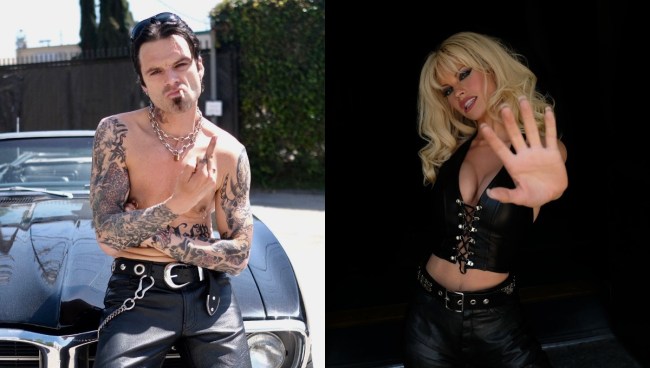 Never heard of Lily James (Baby Driver, Yesterday) before? Well, get familiar, because I have a feeling her turn as Pamela Anderson in Hulu’s miniseries Pam & Tommy is going to be her big-breakout role. Why do I think that? Well… just look at her!

On Friday afternoon, Hulu released the first-look images at James and her co-star Sebastian Stan as Pamela Anderson and Tommy Lee, and the pair look INCREDIBLE as the iconic 90s couple. In fact, the first time I came across that black-and-white photo, I legitimately scrolled right past it thinking it was merely a throwback picture of the pair. Nope — that’s Sebastian Stan and Lily James.

Seth Rogen and Nick Offerman will also star in the miniseries.

In addition to James, Pam & Tommy could also prove to be another springboard for Stan’s career as the 38-year-old approaches A-list status following his star turn in the Disney+ series The Falcon and the Winter Soldier.

Pam & Tommy  — which “depicts the marriage between Pamela Anderson and Tommy Lee following the release of their infamous sex tape — will also feature Seth Rogen as Rand Gauthier, the man who infamously stole Tommy and Pam’s sex tape:

My co-stars, Sebastian and Lily, are a lot cooler than I am. #PamandTommy pic.twitter.com/r8YWh1eBuJ

At this time, the Hulu miniseries (which began production in April), does not have an official release date. Given that filming is underway, though, a late 2021/early 2022 release seems most likely.