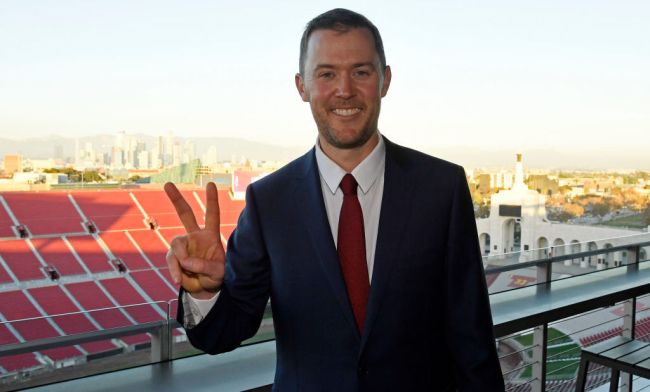 I was born in New Jersey and live in New York City, so I simply can’t sit here and pretend like college football is in my DNA the same way it is for people who live in the South or the Midwest. I get that, I really do. But sometimes, objectively, the passions of SEC and Big 12 fanbases can be hilariously overwhelming. I’ll never forget — about a decade or so ago — the Alabama Crimson Tide fan who literally *went to prison* for poisoning trees at Auburn’s Toomer’s Corner. Surely, more well-versed college football fans can cite numerous examples of fanbases taking things to the extreme.

You know who else (unfortunately) loves taking things to an uncomfortable extreme these days? American politicians! On both sides of the political aisle, to be fair. Take Oklahoma Sen. Bill Coleman, for example, who’s proposing that the state name the final 3 inches of State Highway 325’s westbound lane, which he considers to be the “tiniest section of our most desolate highway”, the Lincoln Riley Highway. Obviously, Sen. Coleman is quite salty about Riley’s decision to leave Oklahoma for the sunnier pastures of the University of Southern California.

“While we are all free to pursue employment elsewhere, there is a level of professionalism that is expected to be adhered to,” Coleman said in a statement. “From all indications, professionalism was pretty much absent in how this departure was executed.” [via The Oklahoman]

Now, in the grand scheme of things, is this particular gesture all that extreme? No, of course not. It’s a fun little ribbing of a former coach. But is the fact that Riley’s departure occupies so much headspace in this Senator’s mind objectively ridiculous? Yes! We’re talking about a college football coach taking another job and now this *United States lawmaker* has spent actual brainpower trying to figure out a way to diss him back. In the famous words of Taylor Twellman, WHAT ARE WE DOING?!

RELATED: Lincoln Riley Was Ruthlessly Trolled By College Football Fans On College GameDay For Being A Coward