Hell To The Yes, The First Pics Of Linda Hamilton In Her Return As Sarah Connor in ‘Terminator 6’ 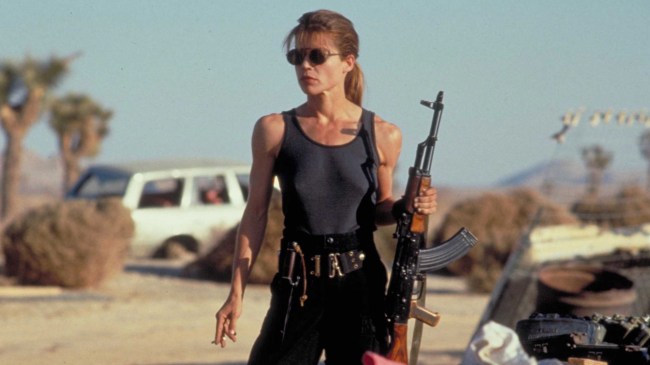 YES. The first set pics of Linda Hamilton in her return to the iconic role of Sarah Connor in the upcoming, currently untitled Terminator 6 movie are here and she still looks like a goddamn boss.

It was just last week that Jamie Lee Curtis joked when talking about her return to the role of Laurie Strode for the follow-up to the 40-year-old Halloween horror classic and said, “Laurie isn’t a badass, she’s smart and she survived. I also don’t want her to be a badass, I want her to be prepared. I want her to still be who she is but prepared because she’s not Linda Hamilton, I don’t have those arms.”

We also get our first look at Halt and Catch Fire star Mackenzie Davis on the set, who will always and forever be Yorkie from Black Mirror episode “San Junipero” to me.

This Terminator film, which also sees the return of producer James Cameron (Hamilton’s ex-husband) and Arnold Schwarzenegger (he said he’ll be back), will be a direct sequel to Terminator 2: Judgment Day. (It’s like Terminator 3: Rise of the Machines, Terminator Salvation, and Terminator Genisys never existed!)

“There are 50-year-old, 60-year-old guys out there killing bad guys, but there isn’t an example of that for women,” Cameron told The Hollywood Reporter last September.

Tim Miller, who made his directorial feature debut with Deadpool, will be directing the sequel.

“We’re starting a search for an 18-something woman to be the new centerpiece of the new story,” said Cameron about this new film in September. “We still fold time. We will have characters from the future and the present. There will be mostly new characters, but we’ll have Arnold and Linda’s characters to anchor it.”