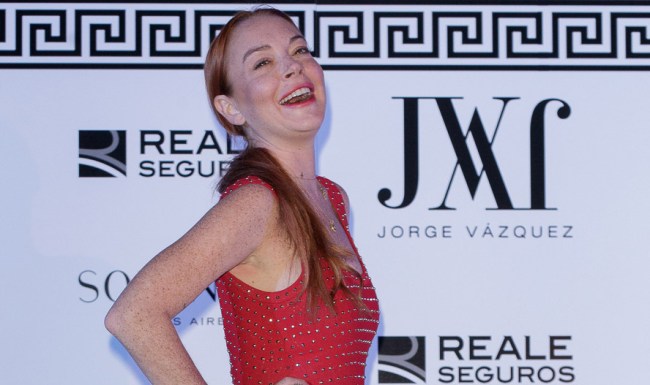 Who would have ever thought that a former teen star would be able to make such a comeback in her late forties the way Lindsay Lohan is about to do with her new MTV reality show?

Hang on… someone’s trying to tell me something… wait, what? Lindsay Lohan is only 32-years-old? That’s not right, is it? Huh. I’ll be darned. Sorry, back to my original thought.

After wishing for it for what feels like decades, Lindsay Lohan is finally getting her very own, standlone starring role in a reality TV series called Lohan Beach Club. Why is it called Lohan Beach Club? Because LiLo is now a Greek club magnate with her own set of properties including a couple of beach houses in the Greek Islands.

No, I am not joking.

Over the course of the season, Lohan’s team of handpicked brand ambassadors must prove their expertise, ambition and charm while helping bring Lohan’s vision to life. Per MTV, the stakes are high as the team establishes new friendships and alliances while striving to rise above the temptations the Mykonos nightlife scene has to offer.

Nina L. Diaz, President, Programming and Development for MTV, had this to say about the sure-to-be hit show, “Lohan Beach Club (working title) offers viewers VIP access to one of the most exclusive destinations in the world, and a behind the scenes look at how a young, successful entrepreneur runs her empire. We are thrilled to have such a passionate and creative partner in Lindsay to help explore this intriguing culture, all through the eyes of her brand.”

“Intriguing culture” is a certainly one way to put it.

Check out the teaser below and keep an eye out for the show’s premiere at some point in the near future.

Also, in other news straight from the year 2006, Paris Hilton still hates LiLo.