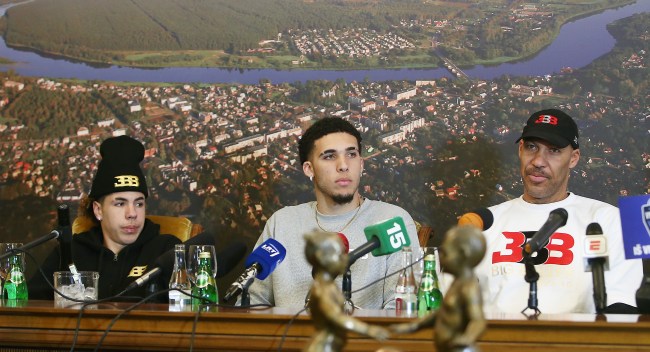 The question we all ask ourselves when choosing a college or job is ‘Do I want to be a big fish in a small pond or just a faceless leech on the back of something greater?’ LaMelo and LiAngelo Ball chose the former. LaMelo is fucking 16 years old and wasn’t even born when the movie Gladiator came out. LiAngelo was just a three-star recruit who was legitimate bench warmer at UCLA and never stepped foot on the court during a regular season game. Despite both being entirely undeserving of praise and admiration, the two have been treated like the Beatles in Lithuania.

Granted, Lithuania has a total population of about 2.8 million, which works out to be less than a third of the population of New York City. Granted, it’s most famous citizen could very well be Arvydas Sabonis, the former Portland Trailer Blazer center. But the pandemonium behind these very average basketball players is hard to conceptualize. And there’s no one more responsible for the fanfare than the mad genius, LaVar.

Love him or hate him, if LaVar Ball didn’t exist, the best rap song of our generation would cease to exist. Ladies and gentlemen, I proudly introduce you to this Lithuanian rap song encapsulating the excitement around the Ball family.