The Academy ‘Sabotaged’ Liza Minnelli, ‘Forced’ Her On Stage In A Wheelchair, Says Close Friend 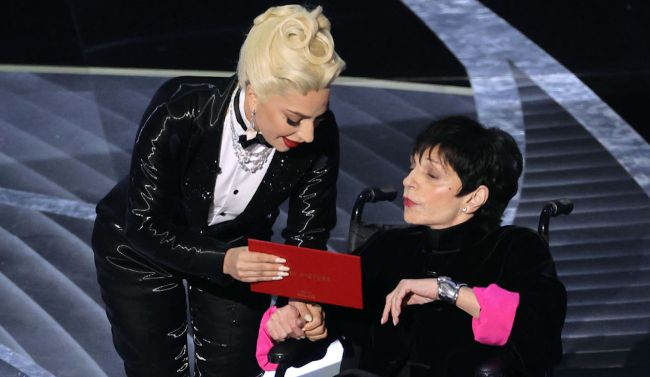 Michael Feinstein, a singer, pianist, and friend of Hollywood legend Liza Minnelli, says that the 76-year-old actress was “sabotaged” while presenting at this year’s Oscars and that the Academy “forced” her on stage in a wheelchair to present the award for Best Picture to Coda

The moment immediately went viral, with many praising how Lady Gaga handled the situation, telling the famed Oscar-winning actress “I got you,” to which Minnelli replied, “I know.”

This is like a lesson in how to facilitate older people while honouring who they are.
What a class act by @ladygaga with legend Liza Minnelli.
The conferred whispers of "I gotcha" "I know" picked up by the mikes make it especially touching.pic.twitter.com/2JOWyrTQxn

Despite the tender moment, though, Feinstein said during a recent interview that the Cabaret star — one of the few performers to win an Emmy, Grammy, Oscar, and Tony award (known as an “EGOT”) — was “sabotaged” and “forced” on stage in a wheelchair.

“She was sabotaged,” Feinstein said during a Tuesday appearance on SirusXM’s The Jess Cagle Show.

“She was nervous, and it made her look like she was out of it,” he said. “Can you imagine being suddenly forced to be seen by millions of people the way you don’t want to be seen? That’s what happened to her.”

The moment with Minnelli and Gaga was just one of many headline-making moments from the night, as Best Actor winner Will Smith also infamously got on stage and smacked stand-up comedian Chris Rock in the face for making a joke about his wife Jada Pinkett Smith.