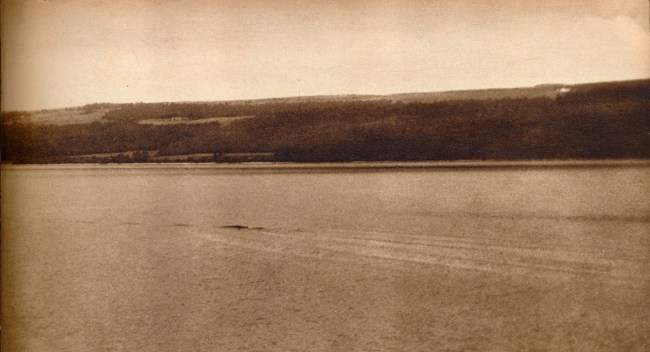 Earlier this week we shared a new report regarding scientist Henry Bauer, a former professor at Virginia Polytechnic Institute and State University, claiming he has finally solved the centuries-long mystery surrounding the Loch Ness Monster.

Bauer believes that the Loch Ness Monster, based on descriptions of the creature, is a a type of undiscovered turtle that somehow got trapped in the Loch many years ago.

“The most popular idea is that the Loch Ness Monster has a relationship to extinct plesiosaurs,” Bauer told The Daily Record. “But this is difficult to square with the rarity of surface sightings, let alone occasional sightings on land.”

He continued, “On the other hand, everything described for the Loch Ness Monster squares with is known many living and extinct species of turtles. They’re air-breathing but spend very long periods in deep water. They venture onto land, are very fast in water, have the ability to be active in very cold water and have relatively long necks.”

However, as The Daily Record reports this week, his claims and theories haven’t stopped the Loch Ness Monster from still being spotted in Urquhart Bay.

In fact, Nessie has already been spotted three times in 2021, twice in just one week.

The first sighting took place on January 11 by an American, Kalynn Wangle,

She noticed a “V-shaped wake” followed by “something black” surfacing on the water for a second, before disappearing back under.

After checking back the footage a few times, she felt certain of what she saw and reported it to the Official Loch Ness Monster Sightings Register, who later verified her account.

Sighting number two was recorded by Eoin O’Faodhagain of Drumdoit, Co Donegal, who says he saw the Loch Ness Monster on January 19, was able to observe the cryptid for 20 minutes moving about in the water, and even captured a three minute video of the creature.

“I just went into the webcam at 2:11 pm and immediately saw what I could make out was two objects splashing around in the bay about 100 feet apart,” said O’Faodhagain.

“They were two black objects throwing up a lot of water, and from the distance were large looking in the water. Then the one on the right submerged, and then came up again. The one on the left did the same thing intermittently.

“They were visible for up to three minutes, and then there was nothing. They could have been a couple of feet out of the water and maybe a dozen feet long.”

Considering that there were 13 confirmed sightings of the Loch Ness Monster in all of 2020, three sightings already taking place in just the first three-plus weeks of 2021 is certainly of note.

Keeper of Register of Sightings Gary Campbell, who is responsible for officially ruling out false sightings, agrees, stating that these early 2021 sightings are “a great start to the year.”

That it is, Mr. Campbell. That it is.