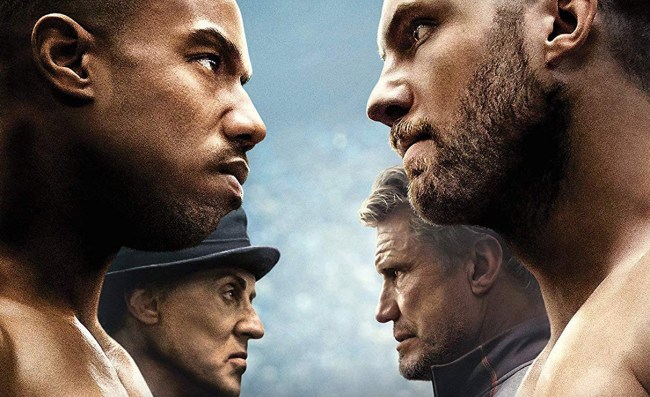 Back in February of this year, Sylvester Stallone teased all Rocky fans with a short behind-the-scenes look at a fight scene between Rocky Balboa and Ivan Drago that ended up being cut from the version of Creed 2 that ended up being shown in theaters.

“It would’ve been extraordinary!” Stallone wrote about the scene. NO SH*T IT WOULD HAVE BEEN!

Unfortunately, and shockingly, as we learned recently, Stallone has “zero ownership” of the Rocky franchise so that call ended up being made by director Steven Caple Jr.

This week, during an appearance at FanX Salt Lake Comic Convention, Dolph Lundgren shared more background on the scene, including what it would have entailed, and how he felt about duking it out with Sly for the first time in over 30 years, according to a Comicbook.com report.

“So Rocky comes down in the lobby, and we basically [say], ‘We’re going to go up there and talk to him, take some photos.’ [Rocky says], ‘I can’t let you do that.’ So then there’s a kind of shoving match, and I take a swipe at him, and then we end the fight in the lobby,” said Lundgren. “It was fun. It was interesting, because I hadn’t thrown a punch at Stallone since ’85, because in Expendables, we’re on the same side.”

Lundgren admitted he was hesitant to do the fight scene because Stallone had been working “all day doing dramatic stuff” and he was “not in a good mood” when he entered the lobby.

“I could see people clearing out. I was like, ‘This is not going to be good, I gotta get in a fight with this guy now?’ He’s also producing the movie, he’s my boss, all of that,” Lundgren. “It worked out fine, we both enjoyed it. But I think the director decided he didn’t want the fight in there. For some reason, they took it out. I haven’t seen it cut together — I think it’s on the DVD or something. But Stallone was really upset, he wanted it in there. But I guess it broke the flow of the picture somehow, so there you go. Maybe next time.”

When that “next time” will be is still up in the air.

Meanwhile, Stallone, who previously said he was done playing Rocky after Creed II, has already backtracked on that statement and admitted he is working on a new Rocky movie.

“Rocky meets a young, angry person who got stuck in this country when he comes to see his sister. He takes him into his life, and unbelievable adventures begin, and they wind up south of the border. It’s very, very timely,” Stallone told Variety. “Do you tell someone that you just met in the street who’s struggling and homeless to get out, or do you take him in? If you take him in, you’re in trouble.”

Whether either of those movies ever gets made remains to be seen, but Winkler says he is anxious to make both, so we’ll see.