Magic Johnson Dunks On ‘Winning Time’, Says He’s ‘Not Looking Forward To’ The HBO Series About The Showtime Lakers 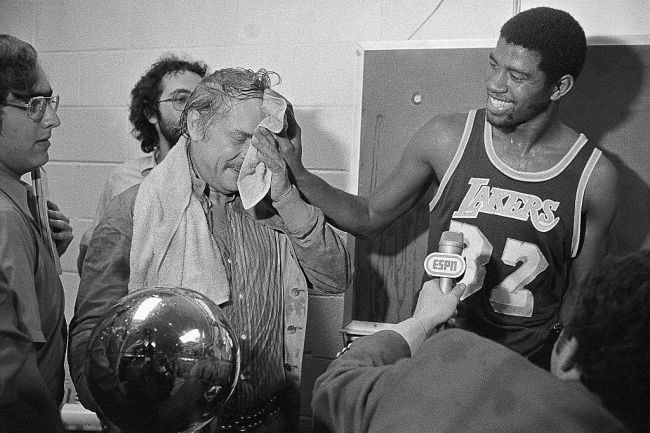 As soon as the trailer for HBO’s new series Winning Time: The Rise of the Lakers Dynasty dropped a couple of weeks ago, television and basketball fans alike were immediately hyped for the new series about the iconic Showtime Los Angeles Lakers from the broadcasting powerhouse.

Magic Johnson — a key figure of those teams — doesn’t feel the same, though, as he recently told TMZ Sports that he’s “not looking forward” to the Adam McKay-helmed show.

The Jeanie Buss-focused series that Johnson is referring to — which will reportedly be on Netflix, not Showtime — will be a Mindy Kaling-produced workplace comedy and will follow “Eliza Reed, the governor of a fictional team, as she navigates NBA ownership and family drama with her best friend by her side,” according to The Hollywood Reporter. There are also reports of an untitled Lakers docuseries in the works at Hulu, with Buss and Training Day director Antoine Fuqua set to executive produce.

Winning Time: The Rise of the Lakers Dynasty, which stars John C. Reilly as Jerry Buss, chronicles the Lakers’ dominance throughout the 1980s. The series was developed by Academy Award-nominated filmmaker Adam McKay, director of films such as Anchorman: The Legendary of Ron Burgundy, Step Brothers, The Big Short, Vice, and the recent Netflix film Don’t Look Up.

In addition to Reilly, the series stars Jason Clarke as Jerry West, Rob Morgan as Earvin Johson Sr., Kirk Bovill as Donald Sterling, Gaby Hoffmann as Claire Rothman, Hadley Robinson as Jeanie Buss, and newcomer Quincy Isaish as Magic Johnson. The series is based on Showtime: Magic, Kareem, Riley, and the Los Angeles Lakers Dynasty of the 1980s, which was written by Jeff Pearlman.

The series holds additional significance in the entertainment world, as McKay recently revealed that his decision to cast Reilly as former Lakers owner Jerry Buss instead of Will Ferrell was a key factor in the pair’s falling out, as the two former collaborators no longer speak to each other.

McKay says he’s written emails to Ferrell, attempting a rapprochement, but has never heard back. “I f–ked up on how I handled that,” McKay said about his handling of the casting decision. “It’s the old thing of keep your side of the street clean. I should have just done everything by the book.”