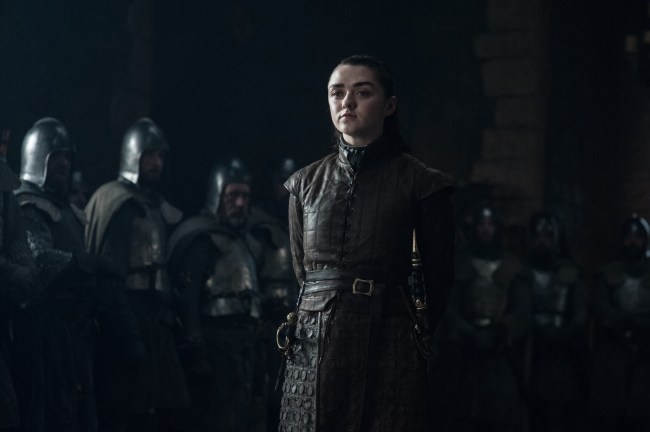 Maisie Williams has been a worldwide star for years. She gained fame from landing the role of Arya Stark on HBO’s Game of Thrones, the youngest of the Stark women and one of the main characters on the TV show.

The 8th and final season of HBO’s Game of Thrones will air sometime in 2019 and Maisie Williams has officially wrapped on her character (assuming there won’t be reshoots which there shouldn’t be). In a recent interview with the UK’s Guardian, Maisie Williams opened up about life as a young actress, harassment on social media from her millions of followers, and she then went on to discuss Arya Stark’s ending on Game of Thrones.

A lot has been discussed about how this final season is being filmed. The 8th season is being shot across a handful of countries and in a bunch of different locations. There have been rumors that the showrunners filmed multiple endings and passed around multiple fake script endings to prevent spoilers from prematurely hitting the Internet before the 8th season has a chance to air.

@maisie_williams and Melisandre at the House of Black and White @instagram studio at #GoTPremiereLA. #GameofThrones

In the interview on The Guardian, Maisie Williams didn’t talk at length about Arya Stark’s final scent on Game of Thrones but she had some choice words. I’m certainly intrigued by what she had to say and what her comments could potentially mean for the final moments of the show before it wraps up forever.

Her first comments about the show’s final moments come when he was asked about getting to the end of the show. Some of her cast members, her closest friends after all these years, weren’t ready to let it go yet. But it sounds like Maisie Williams was more than ready to see the Game of Thrones reach its conclusion.

Williams says that some cast members are still mourning its loss, but she feels at peace with leaving Arya behind. After all, as Arya, she has witnessed the massacre of several family members, joined a guild of shapeshifting assassins, gone blind, regained her sight, and served an enemy the flesh of his sons in a pie. Even by the show’s bloody standards, she has been one of the most bloodthirsty. “I got to the end and I didn’t want more. I had exhausted every possible piece of Arya. And this season was quite big for me. I had a lot more to do.” Then, in case anyone thinks she’s giving too much away about the tightly guarded ending, she adds: “Mainly because there’s just less characters now, so everyone’s got more to do.” (via Guardian)

So she seems to be hyper-aware that anything she says is potentially a spoiler at this point but then she continues when asked about Arya Stark’s final moments on the show and she could be blowing smoke here or she could be giving away more than she realizes.

She will say, however, that her final scene was “beautiful. I ended on the perfect scene. I was alone – shocker! Arya’s always bloody alone. But I was alone and I had watched a lot of other people wrap. I knew the drill, I had seen the tears and heard the speeches.” How was her own speech? “It wasn’t something I planned, but in that moment I realised what the show meant to me.” She went off to her trailer for a little while, to be alone, then they went for a fancy meal. “And drank a lot of sake.” (via Guardian)

So, she’s alone in her final moments. We know she’s not alone when Season 7 left off. Does this mean she’s abandoned her sister Santa and left Winterfell? Does this mean that she’s stuck in a broom closet and everyone around her is dead from White Walkers? Is she alone because she’s been murdered in the woods by a Faceless Man who tracked her down? Or is she just alone because that’s the way the scene was filmed and there’s nothing overly significant about it?

What do you guys think? Sound off down below in the comments if you want.

You can also read the full interview here over on The Guadian if you’re interested. (h/t Maxim)