Maisie Williams Did The ‘Hot Ones’ Challenge, Shivered Uncontrollably While Sharing ‘GoT’ Secrets, 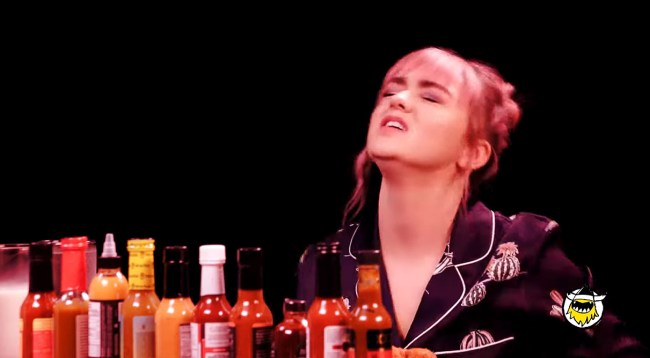 In the latest episode of First We Feast’s “Hot Ones” Challenge, host Sean Evans was joined by none other than Arya Stark herdamnself, Maisie Williams.

During her hot sauce tasting session, Williams was asked several burning questions (see what I did there?) about the HBO juggernaut Game of Thrones.

Notice I said hot sauce tasting session and not hot wings tasting, as has been the case throughout a majority of the show’s 10-season, 168 episode run.

That’s because the woman who took out The Night King is not a meat-eater. So she substitued in some cauliflower for the chicken wings.

Unfortunately for her, being vegan didn’t do anything to quell the fire (no ice) of the sauces she had to put on her veggies.

“Can I have one that’s not covered in hot? I think I’m losing my mind!” Williams said at one point.

Later, after addressing several Game of Thrones topics, including the time Queen Elizabeth II visited the set, writers giving out fake scripts as tricks on the cast, being shouted out by Drake, and providing confirmation that she did indeed almost miss her audition for Arya Stark because of a field trip to a pig farm, Williams began shivering uncontrollably and proclaimed after the final sauce that she had “made a huge mistake!”