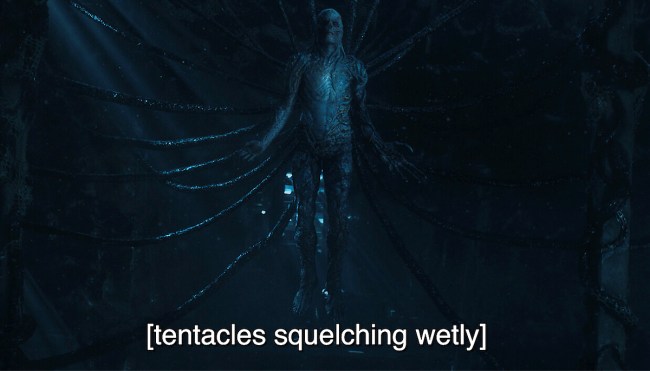 There was once a time when the mere presence of subtitles was enough to make many moviegoers skip a foreign film or force television viewers to change the channel, but it’s safe to say things have changed quite a bit over the past few years.

A survey conducted in 2021 found that 80% of people between the age of 18 and 24 opt for closed captioning when they’re consuming content (compared to less than 25% in the 56-75 group who do the same). It’s not entirely clear why that’s the case, but experts seem to believe its a combination of the rise of popularity of international titles like Squid Game (as well as the accents in programs like Derry Girls and Peaky Blinders) and the increased comprehension that comes with having dialogue in your native language splashed across the bottom of the screen.

As a proud member of the Subtitle Squad, I had them locked and loaded when I went to check out the fourth installment of Stranger Things when the first batch of episodes hit Netflix in May, and it only took a few episodes to realize whoever was in charge of transcribing the action this season seemed to have a huge thing for wet squelching.

I soon discovered I was far from the only viewer who noticed that was the case, as the extremely descriptive closed captions quickly became a hot topic of conversation online.

I swear whoever writes the Stranger Things subtitles is just doing it on purpose now.

(This is a meme, but it honestly isn’t far off from the truth.) pic.twitter.com/WCkLvs2Q5p

having subtitles on for stranger things is such a fucking MISTAKE… THE FUCK DO YOU MEAN “TENTACLES UNDULATING MOISTLY?????” 💔

It turns out those very specific subtitles were the work of a man who asked Vulture to identify him as Jeff T. in an interview where he shed some light on the thought process that led to the creation of the viral sensations.

Jeff admitted he “was trolling a little bit” when he opted to deploy “[tentacles undulating moistly]” in one of the many scenes involving Vecna’s realm in the Upside Down. He also said he drew some inspiration from words that tend to pop up in the ASMR videos he watched when it came to the adjectives he picked, and also included some fairly specific references to Dungeons & Dragons that he picked up during his own campaigns.

The outlet also spoke to Quality Assurance editor Karli Witkowska, who worked in conjunction with Jeff to assure everything was up to snuff (neither of them is employed by Netflix, which outsources closed captioning to third parties).

She acknowledged she’s thrilled by the reception from people outside of the communities the subtitles primarily catered to, saying:

“The deaf and hard-of-hearing community isn’t just people who have been deaf from birth; it’s also people who have lost their hearing or have partial hearing, so it’s important to strike a balance of creating descriptors that describe the sounds but also evoke the emotion, so they can relate to these shows too…

Subtitling for the deaf and hard-of-hearing is first and foremost an accessibility feature. That’s why it’s there, but to see it be opened to a new audience is unbelievable.

In my entire career, I’ve never seen anything be so well received.”

It’s too early to know if Jeff and Karli will be tapped to handle the fifth (and final) season of Stranger Things, but there will be some huge shoes to fill if that doesn’t end up being the case.