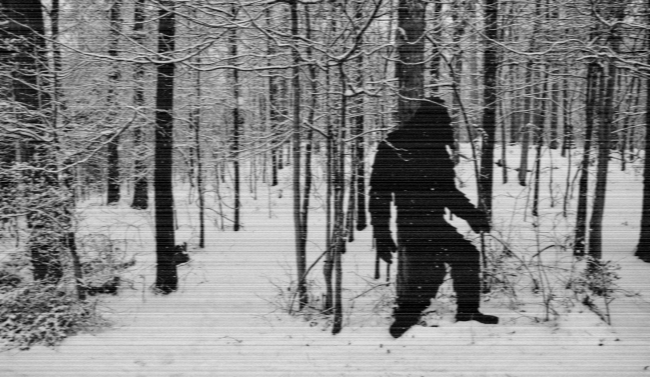 We can now add Colorado to the ever-growing list of locations where Bigfoot may be calling home.

A man from Northumberland in the United Kingdom says he had a heart-pounding encounter with Bigfoot while visiting America in 2007 for a vacation in the Rockies.

“I have traveled abroad many times visiting areas ideal for snowboarding,” he tells Phantoms & Monsters. “I have been to the Alps several times and I have also been to the Canadian Rockies too.”

On this particular occasion, he, his friend, and his friend’s girlfriend had driven up the back of a remote mountain range and taken a snowmobile further up the mountain for some (illegal) snowboarding.

“At around 5 p.m. we decided it was time to get off the mountain before it went dark,” he explained. “My mate decided he was going to take me back halfway to the truck first, then return for his lady. And I could make my way to the truck using my board and wait there for them both. We got about halfway back to the truck (in about 15 minutes) and he stopped to let me off. He said to just board back to the truck and he’d go back and collect his girlfriend.”

As he began heading down a path the snowmobile used he noticed someone walking up towards him about a quarter of a mile away.

“At first I thought it was a bear as ‘it’ was big and ‘it’ was moving quickly. Whatever I was seeing moved with a slope of a walk. I soon realized ‘it’ wasn’t a bear. I thought ‘it’ looked like a big man wearing a large over coat with the collar turned up.

He continued, “The ‘individual’ suddenly took a 45-degree turn to the right and walked into the snow field towards the trees. ‘It’ didn’t slow down, despite walking through three feet of snow. Something which would have almost stopped me dead in my tracks. The moon was shining from behind this ‘thing,’ so I didn’t see any details on the front of it, due to the light shielding ‘its’ features.

“At the time I didn’t hear or smell anything. This thing was big, though, but it would be hard to gauge its exact dimensions from the distance between us. I had only been stopped for about a minute but it seemed like an hour standing there. Still shaking, I decided it was do or die and I pointed the snowboard straight down the track and went as fast as possible.”

He says his friend and his girlfriend arrived on the snowmobile a short while later, but he never did tell them what happened because “my mate would have never let me live it down.”

To this day he still has no idea exactly what he had encountered that day in the Rockies, but it certainly sounds like he almost came face to face with a Bigfoot.