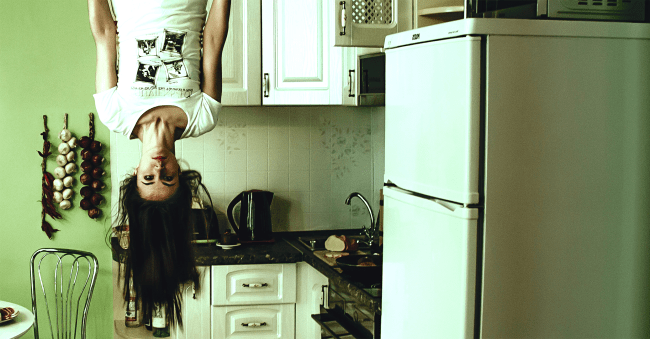 Serious question: What would you do if you bought a used refrigerator, took it home, started cleaning it up, and discovered there was $130,000 in fat stacks taped to the bottom?

You would keep it, right? Yes. Yes, you would. Don’t lie. Of course you would. Or at least I would.

I wouldn’t spend it right away, of course. Just in case someone came looking for it. But I would definitely sit on it, waiting a few weeks to see if there were any news reports or people claiming it was theirs. No way in hell I’d turn it over to the police. Is that wrong?

I ask this question because a man in South Korea actually did find $130,000 taped to the bottom of a used kimchi refrigerator that he purchased online. And he turned the money over the police.

“It was a large amount of money. It was absurd because we rarely had such cases,” said a local police officer.

Related: Two Women Busted Trying To Use A $1 Million Bill … At A Dollar Store

The man, a resident of Jeju Island, South Korea, might still get to keep the money… sort of.

According to the South Korean Lost and Found Act, if the police are unable to track down the rightful owner of the money, or if no one claims it, then he gets to keep it – minus the small matter of 22 percent in taxes.

Also, if the owner of the money does end up being located, the man will still receive five to 20 percent just for turning it in to authorities.

Police are currently trying to track down not only the person who sold him the fridge, but the people who delivered it to him as well.

The worst case scenario for the man who found the money would be for it to end up being linked to some sort of crime. Then the state gets to keep it all and he gets nothing.

So, why would anyone strap $130K to the bottom of their refrigerator? According to The Korea Times, this is just something people in South Korea have been known to do.

The Korea Times even went so far as to determine that a kimchi refrigerator can hold more than 1 billion won ($895,200) if filled with 50,000 won notes.

“Rich people save their cash at home by putting it in a kimchi refrigerator as they expect little return from a bank due to low interest rates,” Jang Min, a Bank of Korea director, said in 2016.