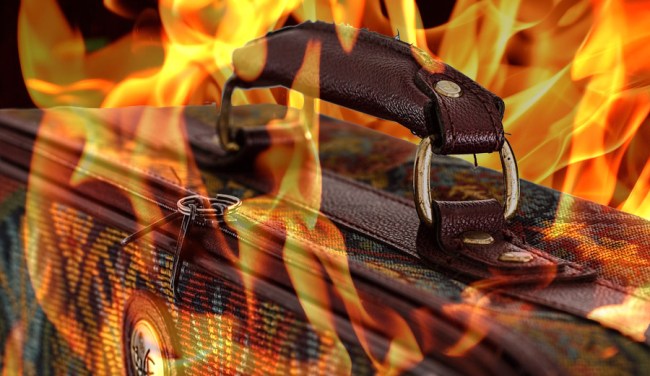 Have you eve been really ticked off because your flight was cancelled? Duh, silly question. If you’ve done any amount of flying at all, you know exactly how that feels.

What did you do when your flight was cancelled? Bitch and moan, right? I mean, what else can you do. You can’t just set your own luggage on fire in some sort of protest.

Because, according to Travel+Leisure, one man was so annoyed that his flight had been cancelled that he did, in fact, set his own luggage on fire.

PIA Flight PK-607, bound for Gilgit, Pakistan at 7 a.m. local time, was delayed on Thursday for technical reasons, and then ultimately canceled due to bad weather at Islamabad Airport.

At this point, some passengers shouted in protest and pushed airport personnel over the cancelation, according to Dawn. But one passenger took it one — or maybe a thousand — steps further.

Of course, there is video of the man lighting his luggage on fire because, why wouldn’t there be?

As a result of the flight being cancelled, passengers were moved to hotels for the night and assured that a special flight would be scheduled for them the next day.

So our travel hero’s protest ended up getting him… nothing. Guessing he was still wearing the same clothes when the flight did eventually left the airport.