Reasonable Man Arrested For Threatening To Kill Friend With Crossbow Over $10,000 Bet About Whether The Earth Is Flat 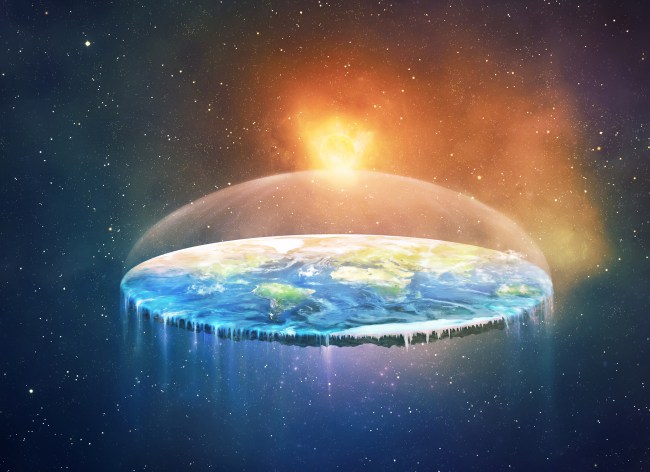 Did you know that there is a Flat Earth Society and it’s ranks have grown by the thousands since establishing itself in 2009?

Did you know that their leading flat-earth theory is that “Earth is a disc with the Arctic Circle in the center and Antarctica, a 150-foot-tall wall of ice, around the rim. NASA employees, they say, guard this ice wall to prevent people from climbing over and falling off the disc.”

(Yes, that theory is real and it’s why this dipshit named Nathan Thompson, founder of the Official Flat Earth and Globe Discussion page, went viral for harassing a NASA employee in a Starbucks in 2017.)

If you thought that was lunacy, buckle up.

A New Zealand man Jamie Mathew Sutherland was arrested for threatening to murder his friend after he believed his friend came up lame on a $10,000 flat earth bet they made at dinner the month prior.

According to the New Zealand Herald, the 36-year-old car wash employee allegedly threatened to kill his friend Louie Lanz in February after Lanz declared the earth is flat “because I believe it’s flat.”

Lanz’s social media is riddled with flat earth content, namely this GIF that allegedly shows how ridiculous the concept of a floating water ball is.

Lanz then bet his friend since primary school $10,000 that his flat-earth claim is rooted in truth.

Lanz then told Sutherland he would have to ”pay up”, which the defendant disagreed with, believing the Earth was round.

A couple weeks later, the two bumped into each other at the local gas station, and Sutherland, dead serious, said he wanted his money.

“He was starting to make threats in order for me to pay up,” Lanz said.

“I told him many times it was just a joke bet … the way I said it was in a joking manner; he just didn’t take it that way.”

The two then bumped into each other again at the gas station weeks later and Sutherland became ‘more forceful” in his demand for the money.

”[He said] if you don’t pay it I’ll get a crossbow, I’ll shoot you and your father, put you in the trunk and they’ll never see you again.”

Lanz didn’t want to take any chances, so he told his father, and the two proceeded to meet Sutherland in court.

Judge Farnan, following a brief “restorative justice” meeting in which the men agreed to end their squabble, decided there was no case to answer and dismissed the charge.

It’s mind-boggling how the flat-earth guy is the reasonable one in this scenario. Maybe these flat-earthers are on to something.