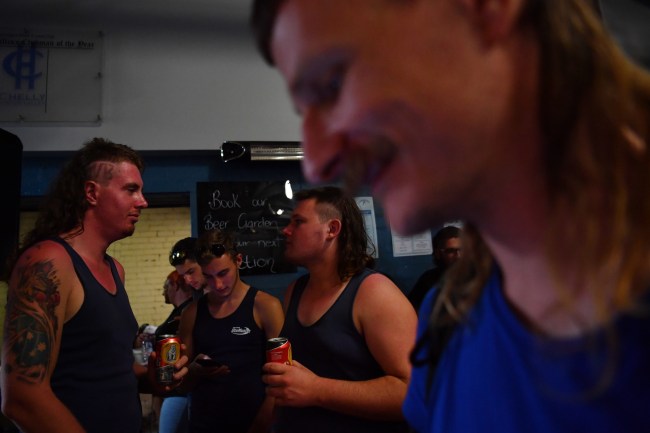 The Mullet is one of the most iconic haircuts on the planet. As far as I know, it peaked in the 80s and has been on the decline ever since. Living its days out in places like Australia, rural England, and throughout the Heartland of our nation.

I proudly sported an unironic mullet when I was a little kid. Why the hell my parents ever let me rock that flow is beyond me but I’m glad they did because I’ll occasionally catch a glance back to my 1st or 2nd-grade photos and I’m reminded of how damn good I looked with a mullet.

Many folks have tried to set the standard of the ‘perfect mullet’. Obviously, Joe Dirt comes to mind but that was a wig so it seems unfair to count it. Country Music’s Joe Diffie had a legendary mullet and as far as I’m concerned it’s the gold standard for mullets. I’m sure there were hundreds of better ones out there but Joe’s mullet hit the mainstream thanks to his presence in Country Music back in the day:

Flash forward to present day and a man from England has just been awarded the Best Mullet in the World at a ‘Mulletfest’ competition in Australia and holy shit is this some enviable lettuce and flow. The only thing missing from this man’s ensemble is a missing front tooth. It’s fucking perfect.

When asked about ‘Mulletfest’, winner Rob Ayton told the Daily Mirror “It genuinely feels like it’s been a religious ceremony for me, Australia — you’ve been amazing.”

Ayton, 31, of Devon, claims he first got the iconic “business in the front, party in the back” style as a joke during an Aussie getaway three years ago, but soon found he liked being a mullet man.

Mulletfest, according to its website, is a day that honors “the best Mullet cuts in various styles and categories, including ‘everyday’, ‘grubby’, ‘ranga’ (red hair), ‘vintage’, ‘extreme’, ‘international’ and ‘junior.’” (via NYPost)

Here’s a complete recap of 2020 Mulletfest which culminated in Rob Ayton’s glorious mullet being crowned as best in the world. The clip’s a little long, feel free to hop around. There are a few more clips below as well.

The official Mulletfest website is a trip. It has a worldwide mullet estimate of 796 MILLION mullets which seems unreasonably high. It also has random mullet trivia like this:

TRIVIA: The term mullet was popularised, by American hip-hop group the Beastie Boys who used “mullet” and “mullet head” as epithets in their 1994 song “Mullet Head”

Mulletfest 2021 is a go. They’ll soon open up entries for anyone who wants to compete with Ayton for the title of the best mullet in the entire damn world. You can click here to visit their website and check it all out.