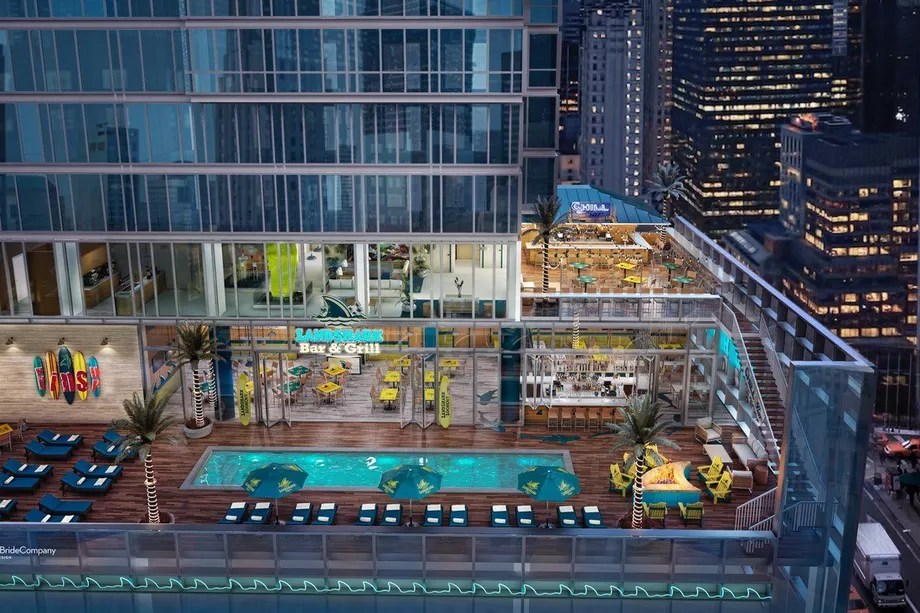 Slip on your flip-flops and throw on your best Hawaiian shirt, then get ready for some sponge cake, tropical drinks, and island-style lager because a little piece of Key West is coming to New York City. Jimmy Buffett’s Margaritaville Hotel is coming to Times Square in NYC.

Jimmy Buffett will open his first Margaritaville Resort in the northeast when the beach lifestyle hotel opens up in Times Square. The new Margaritaville Resort with 29-stories and 234 guest rooms will call 560 Seventh Avenue and 40th Street home. The hotel with a “no worries” attitude will attempt to slow down the hectic pace of the city that never sleeps.

The upcoming resort will feature a rooftop pool, spa, lounge, several different restaurants, and plenty of bars to bring that island vacation feel to New York City. There will be a LandShark Bar & Grill, 5 o’Clock Somewhere Bar, Floridays Airstream Café, and Chill Bar, which is “an all-new concept.” “The Margaritaville Resort Hotel and the lifestyle experience it offers will be the perfect complement to the exciting, fast-paced energy of Times Square and we can’t wait to bring this destination to the travelers and residents of New York City,” said John Cohlan, chief executive officer of Margaritaville.

The Margaritaville Resort in New York City is currently expected to open sometime in 2020. Currently, there are 12 Margaritaville properties, mostly in Florida, but they are going international with new resorts in Costa Rica and Nassau, Bahamas. In March, Buffett invaded New York City when he released his Escape to Margaritaville Broadway musical.

Whether Jimmy Buffett’s resort works in NYC is yet to be seen, but Guy Fieri didn’t have such luck in the big city and recently closed down his American Kitchen & Bar. Despite his “no worries,” beach bum persona, Jimmy Buffett is a non-stop workaholic who rarely drinks.