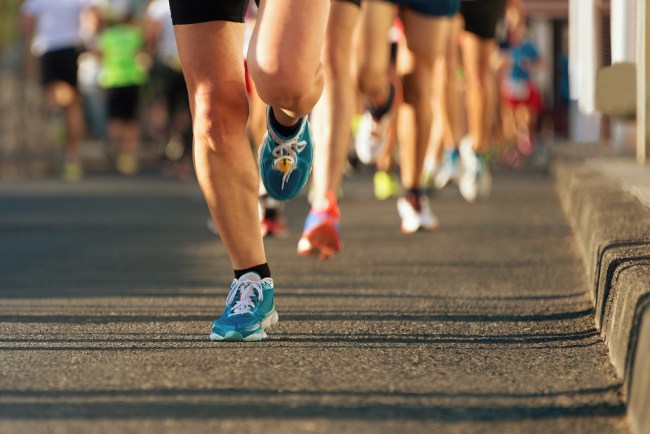 Anyone who has ever seen the film Forrest Gump understands how running can be a solid method for shaking off stress when life gets a little more complex than a freaking box of chocolates. It doesn’t matter whether you’re dealing with a royal ass gasket of a boss, a dead mother or a longtime crush, groupie, drug-addicted chick named Jenny who tells you that she’s dying from AIDS and giving you sole custody of a small child, getting in a little road work, as it is often referred to in the dingy gyms of the boxing scene, has a way of punching the old reset button and putting a man’s head back in the game.

This is called a “runners high.” It is a weird science occurrence in the brain that brings on a sense of euphoria and invincibility in those who push the limits beyond a drunken, late night run for the border. Those who have experienced this feeling explain it as being an “addictive” reaction to miles of pavement that helps them work out of their shit without going postal.

But some runners are turning this concept up a notch by introducing marijuana into the mix. And while it might sound strange to think about getting stoned before working up a sweat, some runners claim that a little THC can actually enhance the runners high. OK, we know what you’re thinking – this is just some B.S. that the potheads are trying to sell so they can incorporate weed into another activity. While this may be true to some degree, the concept of tossing a little reefer into a run is also supported by science. It turns out marijuana may be beneficial in various aspects of the athletic grind.

“You have two different reasons potentially for using cannabinoids,” said Dr. Marcel Bonn-Miller, an adjunct assistant professor of psychology in psychiatry at the University of Pennsylvania Perelman School of Medicine, in a recent interview with The New York Times. “One is to enhance your ability to train. The other is recovery oriented.”

Unfortunately, since the federal government still considers marijuana one of the most dangerous drugs in the world, there is little to no research available on its affect on runners. The Schedule I classification of the cannabis plant, which puts it in the same rank as heroin, makes it extremely difficult for scientists to explore its potential as a therapuetic substance.

Yet over half the nation has legalized the leaf in some fashion. And there is no denying that the herb has skyrocketed into mainstream society within the past decade. Now athletes ranging from professional fighters to basketball stars are coming out in support of, not only the healing properties of this plant, but also the overall wellness it provides them on a daily basis.

But marijuana is not appreciated in the arena of professional sports. Only Olympic athletes can get by with smoking pot from time to time. This is because, a few years ago, the World Anti-Doping Agency increased the acceptable level of THC-metabolites to 150 nanograms – ten times higher than what is allowed in the National Basketball Association (NBA). The agency amended this rule because it understands that marijuana does not give athletes the competitive edge in the same way as other drugs, like steroids.

Some athletes claim that marijuana makes them “more present” during a run and ultimately gives them what they need to become faster and stronger. But medical experts say this is all in their heads. “It will not make you faster, it may slow you down,” Dr. Michael C. Kennedy told the Times.

Still, some studies have shown a connection between how marijuana connects to the brain and this feeling called runners high. It all comes down to a natural cannabinoid produced in the human body called anandamide. This neurotransmitter, which is present in every individual, is responsible for controlling various facets of human function, including mood, appetite and even pain relief. It essentially works to bring balance to both body and mind.

But had it not been for some early marijuana research done in the late 1980’s, scientists may have never come to understand the importance of this unusual compound. Since then we have gained some knowledge about the human endocannabinoid system and its role in keeping the human machine alive and well – a lot of which is attributed to anandamide.

Although it was previously believed that an increase of endorphins was responsible for creating runners high, a 2015 study determined that this feeling was more likely due to the increased anandamide production that happens in the brain during hardcore workouts.

Scientists today still believe there is something to this.

“There’s a lot of overlap in terms of the pathways that are activated between what’s known as a runner’s high and the high that comes from THC,” said Dr. Bonn-Miller. “Both of those involve activation of the endocannabinoid system, so it’s not too surprising that THC might be used to enhance the runner’s high that’s gained from endurance exercise.”