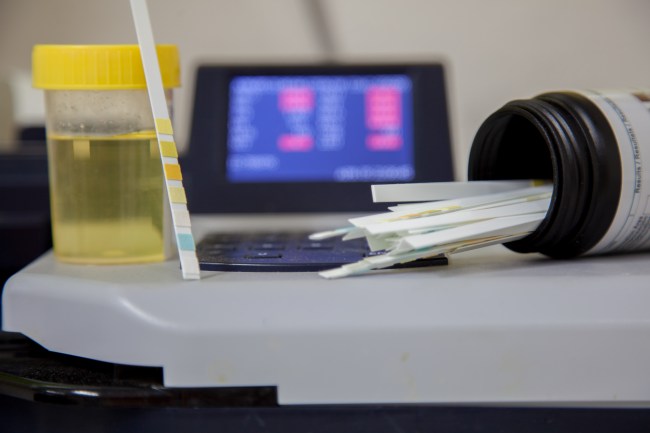 Marijuana has been a part of professional sports for decades. It is one of those situations where, even though athletes all across the board are forbidden from using the herb for both medicinal or recreational use, those dedicated to staying high on and off the court have found a way to bamboozle their employers and maintain the lifestyle that comes with having a multi-million dollar contract.

Not even the threat of being booted off the team, only to end up selling used cars in some small town American cesspool just to pay the rent, seems to be enough to stop some of these guys from getting blazed-out on their downtime. Most would rather challenge a broken system, by cheating drug tests, than ever consider the possibility of going without marijuana.

According to a recent piece from SB Nation, athletes at both the college and pro level say it is relatively easy to run a scheme on drug testing. Some of these players have used detox solutions, while others have gone as far as to strap on a fake penis and fill the cup with synthetic urine.

Perhaps the most infamous account of a star athlete using a phony wiener to pass a drug test is former heavyweight champion Mike Tyson. He told Chelsea Handler back in 2013 that a prosthetic penis “works really effectively.”

It “doesn’t work the way you think it works,” Tyson said. “But it works if you wanna pass a drug test…You take it out—it has somebody else’s urine [in it]—of course, you have to have clean urine in it and hope it’s not a woman’s urine that’s pregnant and they take a pregnancy test.”

These phony schlongs can be easily obtained online. The most popular is called the Whizzinator. They are simply filled with synthetic urine, which is also available through the Internet, giving the user the ability to submit a clean drug screen without arousing suspicion. Just be sure to get one that most closely resembles your skin tone.

The fake wiener method is the safest and most effective method for passing a urine screen. Some people, the more desperate of the breed, have taken drastic measures to pee clean. Everything from drinking bleach to consuming mass quantities of water has been reported. But not only are these techniques extremely dangerous, they do not work.

“Drinking bleach will not increase a person’s chances of passing a drug test. Not in the slightest,” reports The Fresh Toast. “This concept is just some idiotic Internet rumor that was started years ago that some very special people have swallowed as gospel. Please do not do try this at home.”

Although drinking large amounts of water might sound like a logical step to flushing out the THC from the body, this practice can prove fatal. The consumption of gallons of H2O over short periods of time can bring on a nasty condition know as hyponatremia – a fancy medical term for someone who floods his or her blood stream with too much water. Sometimes called “water intoxication,” this condition can cause the brain to swell and if left untreated, it can be deadly.

“Mass water consumption is no way to trick a lab into seeing clean urine,” the report reads. “If you are leaning on this practice, moderate your water intake. Medical professionals recommend a person drink half their body weight in ounces each day. Stick with that.”

Although getting popped for using marijuana in professional sports is not an automatic ticket back into the streets, it can result in hefty fines and game suspensions.

As it stands, the drug policy established by the National Basketball Association (NBA) dictates that a player busted for weed (first offense) must enroll in a drug treatment program. A second offense can result in a $25,000 fine, while a third offense can come with a five game suspension. Players are not likely to get kicked out of the sport for using marijuana, but the suspensions they endure can get pretty radical. Major League Baseball, the National Football League (NFL) and the National Hockey League (NHL) all have similar anti-pot policies.

All players have to do is learn to play the game and drug testing becomes a non-issue.

So, if it is so easy to pass drug tests in the world of professional sports, why are leagues still hell bent on doling them out? The answer: It’s really just about trying to keep the peace with the federal government to ensure the money machine moves along without incident.

“Most big companies, most big businesses, you know, most big entities are risk-averse,” Michael Correia, the government relations director for the National Cannabis Industry Association, told SB Nation. “And it’s pretty straightforward: It’s illegal at the federal level. It says it. There is no ifs, ands, or buts. And so I think a lot of people, businesses, leagues, their counsels are saying, ‘This is illegal at the federal level. Let’s just play it safe.’ And so even though players may be in states where it’s legal and teams may be in states where it’s legal, I think just across the board, people are risk-averse.”

While marijuana is prohibited in professional sports, there is a push for leagues to change the policies. Some advocates want players to have the freedom to use medical marijuana as an alternative to prescription painkillers. Others believe players in legal states should be allowed to use the herb for recreational use without being penalized.

It is estimated that somewhere around 80 percent of professional athletes use marijuana in some fashion.