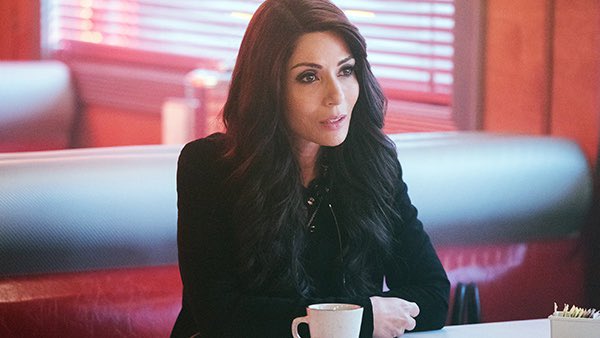 I’ve never seen Riverdale, so I really can’t speak how truly preposterous this news is in relation to the series itself. Regardless, I’m confident enough in my understanding of the entertainment industry that an actress becoming an undercover sex trafficking agent definitely qualifies as fucking insane. Insane in a good way, mind you, but insane nonetheless. Something out of a, well… movie or TV show.

According to reports, Marisol Nichols — the 46-year-old actress who plays Hermione Lodge on the CW teen drama series Riverdale — has been working for the FBI as “an undercover agent in the fight against sex trafficking.” In fact, over the last five years, Nichols has participated in a half dozen child-sex stings around the world.

In the article, written by Erika Hayasaki, she revealed that for the past six years she has been hunting child sex predators. She has been working undercover with agents from the FBI, Operation Underground Railroad and local law enforcement to serve as the “bait” for sting operations domestically and internationally.

She has played the part of a parent pimping out a child, or, depending on what the situation calls for, the role of a child being pimped out to a guy who thinks he is about to have sex with a 12-year-old. Nichols, who is also set to star in Lionsgate’s Saw reboot Spiral next year, has participated in numerous child sex stings around the world over the last few years. [via Deadline]

Since this is Hollywood, though, the story doesn’t end there, as Deadline also reports that Nichols’ exploits are being turned into a television series after Sony Pictures Television optioned rights to her story. As the old saying goes, no good deed goes unpunished, and in Hollywood, it’s essentially the same thing: no good deed goes unadapted. According to Deadline, the series is in the early stages of development and will see Nichols executive produce and likely star in the show. Because, of course.