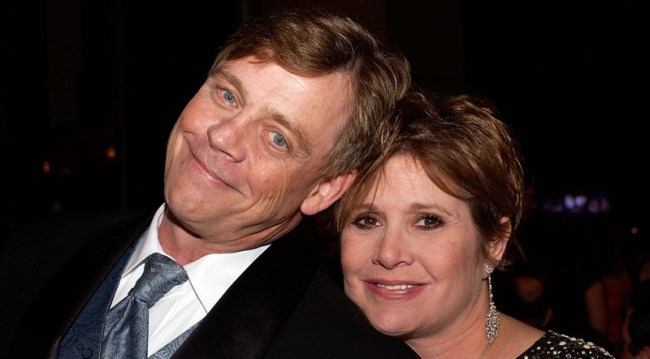 One year ago today the world lost Carrie Fisher and Star Wars fans have been paying tribute to Princess Leia. On Wednesday, Mark Hamill also shared a touching tribute to his former Star Wars castmate Carrie Fisher on his Twitter on the one-year anniversary of her death. In the tweet that has gone viral with over 33,000 RTs and nearly 100,000 Likes, Luke Skywalker said, “No one’s ever really gone…#AlwaysWithUs #CarrieOnForever.”

The first illustration, which is titled “Our Blessed Rebel Queen” and done by Lindsay Vanek, features the rebel general in a holy light and showcases her love of the middle finger and her dog Gary. Then there are two photos of Carrie and Mark from when they were young and last year from filming Star Wars: The Last Jedi.

On December 27, 2016, Fisher died at 60-years-old. This was four days after the actress suffering a medical emergency on a flight from London to Los Angeles. The Los Angeles County Coroner’s Office report stated that “sleep apnea and other undetermined factors” caused her to pass away. The report added that atherosclerotic heart disease, which is fatty tissue in the walls of arteries, also contributed to Fisher’s death. Coroners also found multiple drugs in her system, but could not determine whether the drugs played a role in her death.

Finally saw Last Jedi and not even gonna lie, seriously teared up the first time General Leia came on screen and when this came on at the end! The world misses you Space Mom! #CarrieFisher #Leia #General #StarWars  #LastJedi pic.twitter.com/G6LrRmDikX