Mark Ruffalo Addresses Everyone’s Question About Whether Hulk Could Have Done More In ‘Avengers: Endgame’ 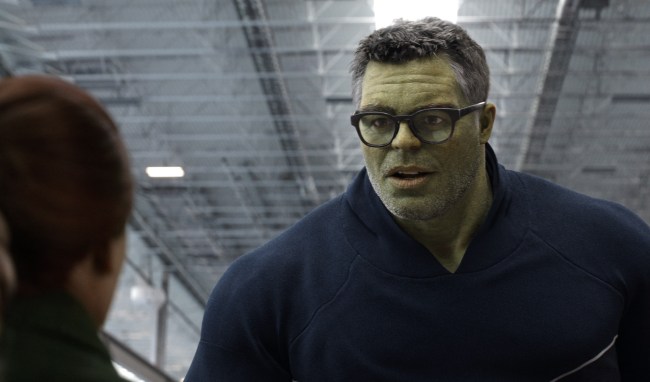 Who out there watched Avengers: Infinity War and Avengers: Endgame and came away thinking these two things: (1) If Captain Marvel is so goddamn powerful why wasn’t she around, like, at all? And (2) why didn’t Hulk, the biggest, strongest, meanest mother-effing Avenger, make more of an effort to try and defeat Thanos?

I mean, if Bruce Banner, as the film showed, had gained control of the ability to Hulk out, why didn’t he? Hulk was scared? C’mon. The Hulk?! He lost Black Widow for cripes’ sake, and the Hulk wasn’t hell-bent on getting some ultra-violent revenge?

This question about whether or not the Hulk could have done more to beat Thanos in Avengers: Endgame was put to Mark Ruffalo recently when he appeared at C2E2 in Chicago.

“I always think you can do more,” Ruffalo replied. “There’s a lot of characters and everyone had to have their moment. And there’s a lot of new people. I’m waiting for a rematch.”

Ummm… you had your chance and wimped out.

Perhaps Hulk will get his chance in the upcoming She-Hulk Disney+ series. Ruffalo is reportedly in “preliminary talks” with Marvel Studios regarding the project.

Throw in the fact that Ruffalo really, really wants to see more of Professor Hulk and chances are good those talks will result him making at least one appearance.

As far as that rematch, well, Thanos is dead, right? Right, Mark?