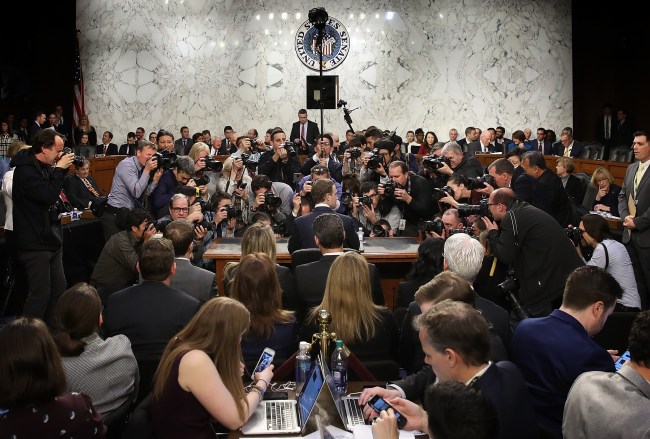 This is Mark Zuckerberg’s worst nightmare. The co-founder, chairman and CEO of Facebook is currently getting grilled by 44 lawmakers over its seemingly reckless usage of its 2.2 billion users’ private data and the role the company played in Russia’s interference with the 2016 election. The 33-year-old Zuckerberg, who has the charm of an unsalted cracker, is not built for this.

Zuckerberg, as terse and robot-esque as ever, apologized for the Cambridge Analytica debacle in which the British consulting firm collected the personal information of 80+ million Facebook users and used it to influence the opinions of voters.

“it’s clear now that we didn’t do enough to prevent these tools from being used for harm, as well. That goes for fake news, foreign interference in elections and hate speech, as well as developers and data privacy.”

The hearing is as boring as it is important. And that’s where the internet picks up the slack. It has produced some laugh-out-loud memes. Check out the ones below for a good laugh.

when everything's fine and you feel great pic.twitter.com/d8wenWQfd5

That face when you just wanted a faster way to rank girls by looks and ended up installing a fascist government in the most powerful country on earth pic.twitter.com/VEaQjz9Z6s

Congressman: So tell us something about yourself that we don’t know, Mr. Zuckerberg.

The Zuckerberg: I am a model 255.03- 5 Alpha Mark XV terrestrial infiltration unit designed to survey weaknesses in host populations.

I know Zuckerberg is likely not human, but goddammit this booster seat hurt me to see. I know that feeling Z-fighter pic.twitter.com/g5xwm3ZnSN

Mark Zuckerberg getting The Real Facebook Experience in listening to Sen. Chuck Grassley, an 84yo man who cannot type and is confused and upset by everything he sees, just kind of rattling on about shit.

“Mr. Zuckerberg, I’m hoping you can answer this question for me: How do I do a Facebook?” pic.twitter.com/5rj7jiEXPb

Not a single Senator has the stones to ask Mark Zuckerberg to take a quiz to see which 90210 character he is.

“Mr. Zuckerberg, a magazine i recently opened came with a floppy disk offering me 30 free hours of something called America On-Line. Is that the same as Facebook?” pic.twitter.com/U7pqpUhEhQ