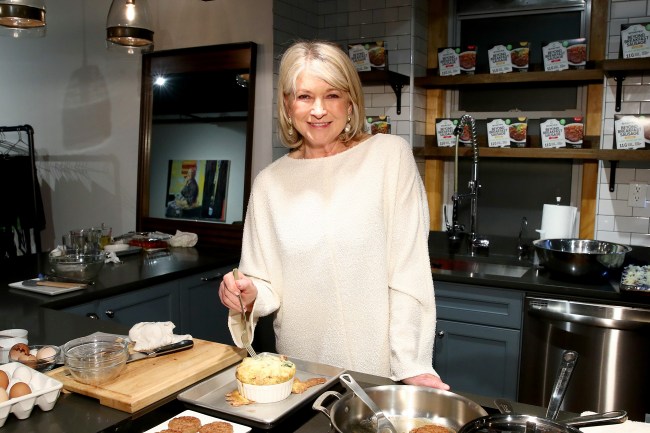 The New York Times ran a delightful character portrait of Martha Stewart, and it might be my favorite thing I’ve read this month. NOBODY is enjoying quarantine more than Martha. It’s not just that she has all the money in the world to do whatever the hell she wants; she’s spent five months in federal prison for conspiracy. You think five months bouncing between her 151-acre farm, Hamptons palace, and wherever else she has houses is going to be tough for her? Get outta here, you goose!

The most eye-opening part of this story was how much Martha has leaned in to the CBD wave. She’s got her own line of products, of course, and she isn’t afraid to sample the goods. Here’s an exchange with the reporter:

NY Times– Eyeing the assortment in front of me, I picked a saffron-colored piece the size of a sugar cube and bit it in half.

“It depends on who you are,” Ms. Stewart said, shrugging. “I pop 20 of them and just feel OK, but some of my friends do two and feel high, I don’t know why.”

TWENTY?! Hooooly smokes Martha, lay off the weeeeeeeduhhhhh (I know CBD isn’t weed. Relax.) The image of Martha Stewart inferring that her friends are pussies for getting high off two gummies is great, but it’s even funnier to think of her peer-pressuring some NYTimes journo into eating CBD pâte de fruit. “Pop it in. Don’t bite it. Pop it in.” You can almost hear how badly she wants to say “pop it in, don’t be a bitch.” Oh Martha, you angel.

The origin story for her love of weed is even better:

“We sat next to each other for seven hours,” Ms. Stewart said. “Snoop must have smoked 10 giant fat blunts, and I inhaled all that smoke. I felt really good.”

“A contact high, that’s what they call it,” she said. “I had to fly that night, my family was in Saint Barths for Christmas vacation. I don’t remember going on the plane. I don’t remember doing anything. I didn’t remember my performance on the roast, but it was very successful.”

Having Snoop Dogg break you in to weed is like having Travis Pastrana teach you how to ride a bicycle. There is NO chance he’s giving you the right dosage, speed, or pointers. Snoop’s frame of reference for weed is so far beyond what any normal citizen should consider that it’s a miracle Martha survived that roast. And she wasn’t even hitting the blunts! Just sitting there in a cloud of Snoop’s secondhand fog before MURDERING her jokes.

Makes me sad that Comedy Central doesn’t release the full sets of these, but you get the idea. Absolutely out of NOWHERE with some of the edgiest jokes that were told that night.

So here’s to the GOAT, Martha Stewart: may she live out her remaining 20-50 years in a haze of CBD giggles.