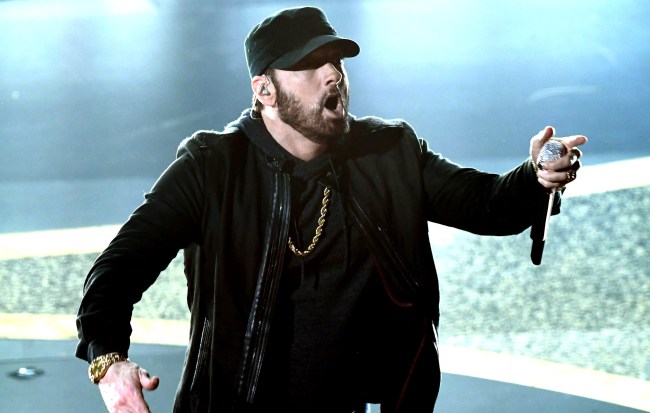 Remember how 18 years ago Eminem starred in the film 8 Mile and won the Academy Award for Best Original Song? C’mon… “Lose Yourself” won an Oscar. You didn’t remember that? Apparently neither did anyone else in attendace at the 92nd annual Academy Awards on Sunday night.

They also had no idea that The Real Slim Shady was going to be performing the song right smack dab in the middle of the awards show as it had not been previously announced.

The performance was made even more shocking by the fact that Eminem didn’t even show up to the Oscars in 2003 to accept the award for his song.

Not that celebrities like Martin Scorcese, Idina Menzel, Billie Eilish, and others were thinking about that when Marshall Bruce Mathers III took the stage at the Dolby Theatre.

In fact, we’re not sure what they were thinking, but it definitely wasn’t something good.

Eminem just made the stage on fire🔥 #Oscars pic.twitter.com/VuXzOJNIIZ

The cold may have never bothered Idina Menzel, but Em’s act apparently does.

Idina is VERY confused by this Eminem performance. #Oscars pic.twitter.com/2OSJrWCcs8

leo’s “this is honestly so important” face for eminem pic.twitter.com/yMmievIY9B

martin scorsese pushing eminem off the stage at the #oscars: pic.twitter.com/moXGOgLju7

Martin Scorsese made a marathon movie in The Irishman but is passing out to an Eminem performance! #Oscars pic.twitter.com/WZ5DEcVmm5

Scorsese loves Eminem as much as he enjoys watching marvel movies 😂🥴 pic.twitter.com/IN6uiRby4V

remember when Eminem had more Oscars than Scorsese

The whole audience trying to jam to Eminem but also confused as to why he is performing #Oscars pic.twitter.com/Hkq8OrEYKF

Eminem also took to Twitter Sunday night to thank the Academy for letting him perform.

Look, if you had another shot, another opportunity… Thanks for having me @TheAcademy. Sorry it took me 18 years to get here. pic.twitter.com/CmSw2hmcZo

This Eminem performance is definitely a surprise but nothing will still stop Three 6 Mafia winning an Oscar. #Oscars pic.twitter.com/X22jQ4dNV1