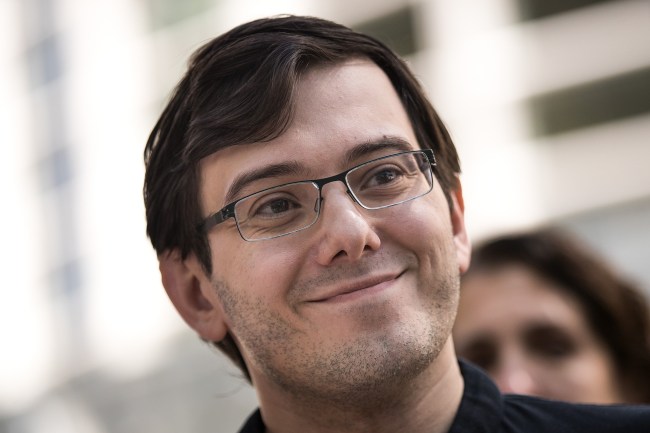 Can you imagine a world in which Martin Shkreli, once the world’s biggest supervillian, ends up becoming the man who ends a global catastrophe? Can you imagine just how much more of a prick all that validation would make him? Truly inconceivable.

Shkreli, who is currently serving a seven-year sentence for securities fraud, is trying to bargain with authorities to let him out of the slammer so he can put an end to the novel coronavirus.

According to Stat News, the 37-year-old is asking for a “brief” three-month furlough from his federal prison in Allenwood, Pennsylvania, to spend time researching potential treatments for the Tom Hanks Disease.

“As a successful two-time biopharma entrepreneur, having purchased multiple companies, invented multiple new drug candidates, filed numerous INDs and clinical trial applications, I am one of the few executives experienced in ALL aspects of drug development from molecule creation and hypothesis generation,” Shkreli wrote in a scientific paper posted online this week.

Shkreli and his scientific partners claim to have used software to screen more than 100,000 compounds against a model of the coronavirus, and narrowed the list down to eight drugs that could be useful in fighting the disease.

If Shkreli is gifted the three-month furlough, he does “not expect to profit in any way, shape or form from coronavirus-related treatments,” he wrote, adding “any company developing a coronavirus drug should seek to recoup its cost at most and be willing to perform the work as a civil service at the least.”

Haha. Martin Shkreli, Civil Servant. This world is crazy, but it ain’t that crazy.