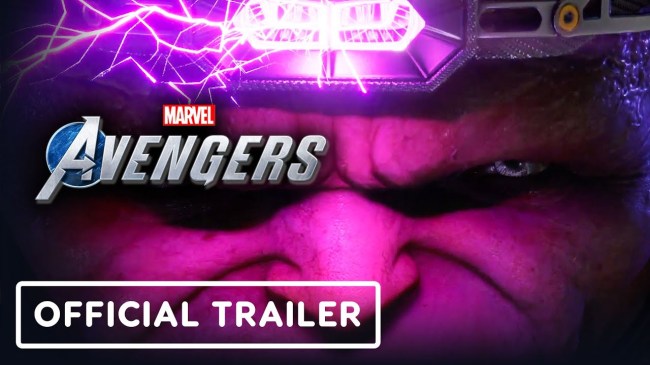 I’ve been up and down when it comes to my excitement for the upcoming Avengers game.

On one hand, well, it’s an Avengers game! The Marvel Cinematic Universe has been around for 12 years at this point and this is the first time we’re getting a video game based on those characters. I’ve always jokingly said about Marvel (who prints billion-dollar movies) that I want them to wake me up when they make an Avengers game, and that day has finally arrived.

On the other hand, the early signs have not been promising, as the game was delayed half-a-year so the studio could make further tweaks (particularly to the character designs). However, despite those further efforts, when the game resurfaced last week, the immediate reaction of the audience was to rip on how literally awkward Hulk’s face look.

This latest teaser, the official story trailer, has swung me firmly back over to the full-steam-ahead-hype-train, as it’s finally been revealed that MODOK will be the game’s primary antagonist.

A former Advanced Idea Mechanics (AIM) employee, MODOK — formerly George Tarleton — was “subjected to hideous experiments, mutating his body into a massive-headed being possessing superhuman intelligence and extraordinary psionic powers, and the process drove him mad,” according to Marvel.  MODOK, which stands for “Mental Organism Designed Only for Killing”, first made his Marvel Comics debut in the year 1967 and was created by Stan Lee and Jack Kirby.

RELATED: The Internet Is ROASTING The Way Hulk Looks In The Upcoming ‘Avengers’ Game

Marvel’s Avengers is set to release worldwide on September 4, 2020, on PlayStation 4, Xbox One, PC, and Google Stadia.