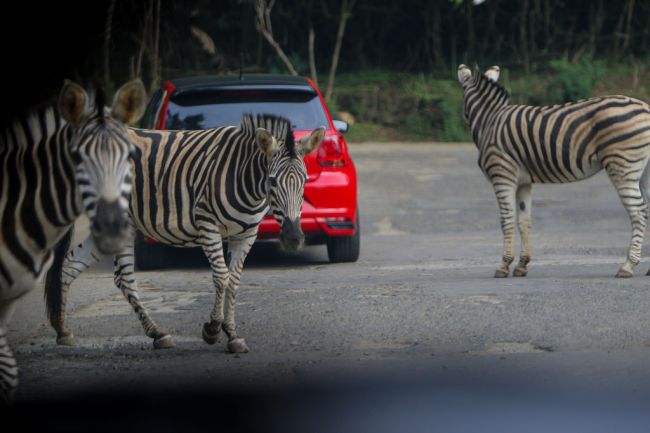 A group of zebras remain on the loose in Maryland and a D.C. Congresswoman is denying responsibility for their release. Yes, you read that right.

Reports first began to circulate about the zebras just about two weeks ago but nobody believed them. Since then, the herd — properly known as a “dazzle” — has evaded all attempts of capture.

Nobody knows what to do.

The group of five zebras have split off into two subgroups. One group of three is roaming one end of the suburb of Upper Marlboro while two others roam the other side.

Rodney Taylor, the Chief of Prince George’s County’s animal services says that the hope to tranquilize the animals so they can be returned to the from from which they escaped.

“You can’t hunt them down. They’re just too fast, they run, they won’t let you get near them. We do have a feeding station set up, and we’re winning their confidence. They are eating there every morning between 2am and 4am.

If you spook them, you’re just pushing them further out. And that’s when it can get dangerous, they can get out on the highway. Things can happen.”

Meanwhile, in a very odd twist, a member of Congress from the District of Columbia issued a statement denying involvement in the release of the zebras.

However, no one was accusing her of doing so.

Representative Eleanor Holmes even provided an alibi for her whereabouts at the time of the zebras escape and later had to clarify that her comments were satirical. It was just a really bad attempt at humor from her campaign, apparently.

My alibi is solid, but given my career of fighting for statehood for the District, explaining the importance of having consent of the governed, and my recent opposition to fences, I can understand why the charge was made.

Perhaps Representative Norton really is innocent and tried (and failed) to be funny. But have we considered the fact that her joke might be an attempt to push the spotlight away from her guilt? Is there a chance that her alibi is exactly that?

In the meantime, local authorities have indicated that it could continue to take days, if not weeks, to round up the zebras and get them back to their rightful home.