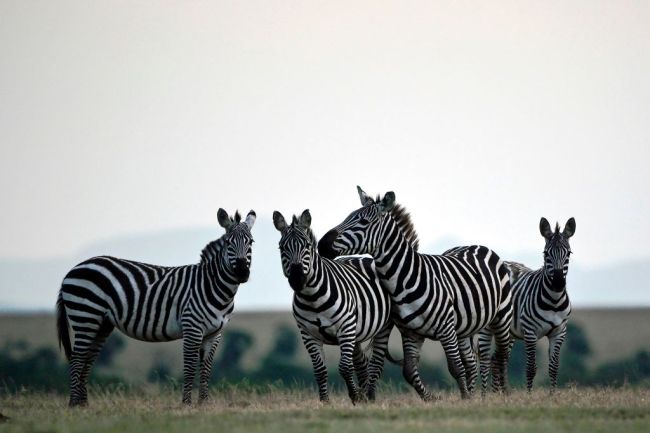 A group of Zebras, properly known as a dazzle, is on the loose in Maryland. The striped animals were first spotted by residents in the suburban town of Upper Marlboro late last week but nobody would believe it.

ZEBRAS GONE ROGUE | The mystery of the roaming Zebras in Upper Marlboro in Maryland is solved. The sightings had residents doing a double-take. >> https://t.co/VtCZvZqq3k pic.twitter.com/Uhl7oopf9m

Authorities first received a report about a zebra running in front of a car on August 31, and then more zebra sightings were reported on September 7th.

Even residents didn’t believe what they saw.

“I thought maybe you know she’s been in the house too long or she’s having a fever or something. So she says, I’m gonna send you a video,” Paul Curling said to Fox 5 Washington DC. “One of my first thoughts was well maybe somebody had a birthday party and they painted some horses for some four-year-olds or something because there’s no way in the world some zebras could be here in upper Marlboro just roaming around like deers.”

Alexis Reed Curling told NBC4 that she called 311 and the dispatcher “thought she was crazy.”

“She paused for a long minute. I said, ‘Ma’am, I am not drinking. I have not had any drugs. There are zebras in my backyard walking on the train tracks,” she said. “I just wanted to know what service could come out because I didn’t want them to get hit, and she paused for a long time and then said, ‘OK, here’s the number.’ “

Despite the disbelief, zebras are very much loose in the area.

Five zebras are on the loose in Prince George’s Co. right now!
Nearby resident Paul Curling shared this video of a zebra seen from his backyard.
Animal services says they escaped from a farm last week near Duley Station Road in Upper Marlboro.
The farm has a permit for them. 🦓 pic.twitter.com/dY7XDx6vfx

The dazzle is legally owned and escaped last week from a nearby farm in Montgomery County. In hopes of coaxing the animals back to where they belong, Animal Control has set up feeding stations along the safe and proper path.

That approach is much different than one in Tennessee earlier this year, when local authorities had to use a taser to corral a singular escaped zebra. Stay tuned to see if the Montgomery County efforts prove as successful!