Flashback Friday: 20 Years Today Matthew McConaughey Got Arrested While Playing The Bongos In The Nude 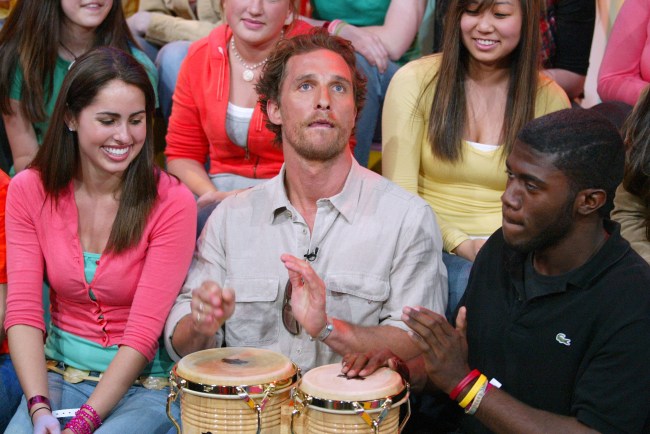 Matthew McConaughey is known for his noteworthy performances, starting with his role as David Wooderson in Dazed and Confused, Detective Rust Cohle in True Detective, and as Ron Woodroof in Dallas Buyers Club. But one of the most memorable Matthew McConaughey moments wasn’t on the silver or small screen. We’re talking about the time McConaughey was arrested while playing the bongos in the nude.

Exactly 20 years ago today, Matthew McConaughey was arrested for intoxication. Around 2:30 AM on October 25, 1999, police officers were responding to a noise complaint and arrived at McConaughey’s rented residence in Austin, Texas. Cops saw the Hollywood actor “dancing and playing bongo drums,” and McConaughey was stark naked. “I could see a nude, white male dancing and playing bongo drums,” the officer stated in his report.

The music was blaring so loud that the officer “knew they would not hear me if I knocked or hollered.” The police officer shined his flashlight into the home to try to get the attention of anyone inside the residence on Meadowbrook Drive.

At the time, McConaughey was attending the University of Texas at Austin, and it was a week shy of his 30th birthday. Matthew was partying with fellow Dazed and Confused actor Cole Hauser, but neither of them saw the flashlight or the police.

The police officers entered the home, McConaughey turned off the radio, and then greeted the cops by saying, “You can’t be in here! Get the f*ck out of the house! Why are you here?”

A police officer asked for ID from McConaughey, identified as the “nude subject” by the cops, the actor replied, “You’re violating our rights! You can’t come in my house like this!”

“I asked the nude male several times to put some pants on,” the police officer stated. “He responded by saying ‘F*ck you.’”

The officer attempted to handcuff McConaughey, but he “reached out with his left hand as if to push me while saying, ‘F*ck you.’” But McConaughey still did not comply with the officer’s orders, and one cop said they had to “push on a pressure point above his collar bone.”

The Oscar-winning actor was still naked as he was arrested and a patrolman wrapped “a long sleeve shirt around his waist to cover him.” When the officer was taking the actor to the patrol car, McConaughey yelled, “This is bullsh*t!” Matthew refused to sit in the police cruiser and told cops, “F*ck you!” The officer said that to make Matthew comply he took “him by the hair,” then kneed him “in the hip area to bend his body backwards into the seat.”

Police say that the home was “low lights and candles,” and they found a bong, a bowl with pot, and a “one-hitter” pipe. Austin PD stated that McConaughey and Hauser were “very intoxicated,” smelled of booze, and “swayed while standing still.”

Police arrested McConaughey with possession of drug paraphernalia charge and resisting transportation. But the charges were reduced to a noise ordinance violation, and he paid a small fine of $50.

In a 1999 Playboy interview, Matthew McConaughey said he regrets nothing. “What’s wrong with beating on your drums in your birthday suit? I have no regrets about the way I got there (jail).”

“I saw the cop’s eyes get big when he identified me and it became, ‘Oh, look what we’ve got here,'” McConaughey said. The actor spent nine hours in jail until his mother bailed him out after paying a $1,000 bond.

Coincidentally, McConaughey’s current home is only 10 miles from the house where the drunken naked bongo session happened.

Who knew that playing the bongos in 1999 would prepare McConaughey for his role as Mark Hanna in 2013’s The Wolf of Wall Street, where he thumps on his chest while humming a song.

While there is no footage from the glorious early morning on October 25, 1999, we do have Matthew McConaughey playing the bongos and smoking a ton of weed in the trailer for The Beach Bum.