Matthew McConaughey Suffers Through The ‘Hot Ones’ Challenge, Drops Some A+ McConaugheyisms 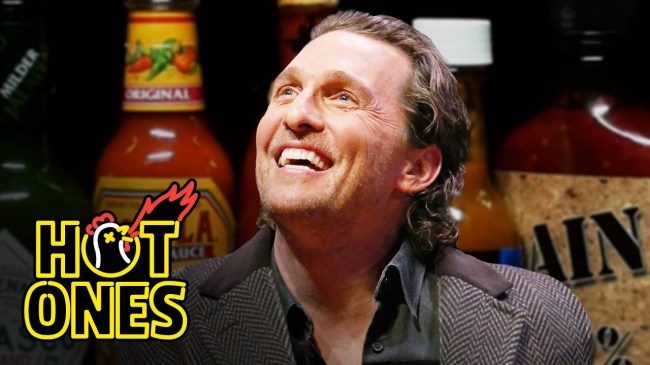 “We just hit the moment where neither one of us want to go take a number one and touch our you-know-what because we will now know why it would be burning.”

That’s how the new episode of First We Feast’s “Hot Ones” challenge featuring none other than the one, the only Matthew McConaughey begins. So you know it’s going to be good.

And it is. Not that we would expect anything less from the Academy Award winning actor.

During this longer than usual episode, McConaughey answers all sorts of questions about his writing process and his upcoming book Greenlights, his job as Minister of Culture at the University of Texas, working with the new Major League Soccer club Austin FC, touching a tiger in Gold, wearing a thong in Magic Mike, how helpful New Yorkers really are, being on the sideline of the greatest college football game ever played – the 2006 Rose Bowl, teaching a college course at Texas, losing a lawsuit against a skin cream company while in high school, and Hank the Cowdog, all while doing his best to survive the wings of death.

McConaughey did okay with the hot sauces in the beginning, but as he waded into the middle segment of the wings of death he finally started to feel some pain, saying, “I got a feeling my sentences are about to start getting shorter.”

Thankfully for us, that most definitely did not happen.