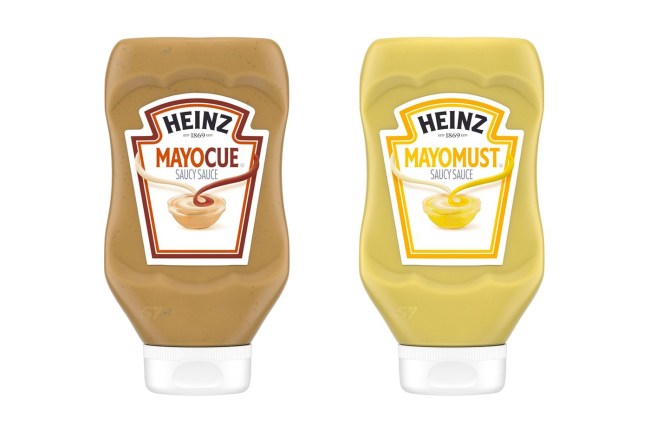 Heinz realized they’d stumbled onto something pretty lucrative when they released Mayochup, the mayonnaise and ketchup hybrid sauce. It was an immediate hit as a dipping sauce and condiment and they’re seeking to continue that success by releasing two more hybrid sauces: Mayomust and Mayocue.

Now they’re treading in some interesting territory here because they are far from inventing the wheel here. People have been mixing sauces at home for centuries.

At restaurants, you probably recognize these mixtures on the menu listed as ‘aioli’. We mix all sorts of condiments in my household as dipping sauces, so this is something that many Americans already have established preferences for.

“Sauce lovers nationwide have been mixing different condiments to create flavor combinations that will take their favorite foods to the next level for years,” said Nicole Kulwicki, Director of Marketing for the Heinz. “First with Mayochup sauce and now with Mayocue and Mayomust sauces, we’re taking out the guesswork to give our fans the perfect condiment blends from the start!”

Also, I wouldn’t be doing my job if I didn’t point out how terrible of a name Mayomust is. It’s already getting torn apart on Twitter with people bashing it as something that sounds like a deadly weed killer or some heinous foot disease.

These sauces might take a little bit to catch on at the grocery store but for people in the know, they are delicious. That said, I’m skeptical that Heinz will be able to move past the name ‘Mayomust’ that seems to be turning people off on Twitter.

How did @KraftHeinzCo marketing not pick up on #Mayomust as a new name for a blend? Sounds like a high grade pest removal spray.
Side note: a real sandwich aficionado demands control of their ratios- Just FYI. https://t.co/SNsKLFt1nK pic.twitter.com/LSnVR8Sj5p

Give me some Mayomust if you must, but I'd rather have a Miracle Whippard or a Honey Mustaffalo. What can I say? I've got a discriminating palate! At least, hoping you buy that, lol!

Mayo already nasty but MayoMust don’t even sound the least bit good. Who wanna top food off with something with the word must in it? Must is bad smell 😂 https://t.co/8Yj9sdrNPR

Another horrendous condiment idea has been torn from the pages of comedy and brought to life. Following in the tradition of Mayochup (“Step Brothers” fancy sauce), it’s Mayomust (“Mr. Show” mustardayonnaise). pic.twitter.com/USOxyELUrk

I’m the type of person who needs control over my sauce ratios when mixing. I don’t like the idea of someone in a lab determining my proper ratios, so I’m not sure this is for me, but I really do think these sauces will catch on.

You can already buy Mayomust on Amazon for cheap!