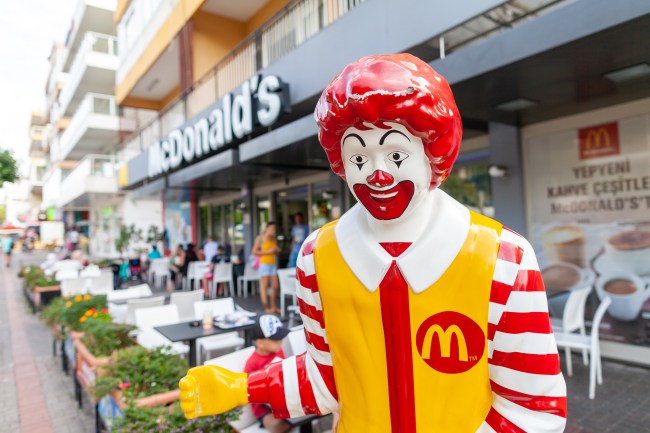 I was today years old when I learned that McDonald’s in Canada has an overabundance of bagel options on their breakfast menu. After some searching around, I found the full Canada McDonald’s Breakfast Menu and did a CTRL + F for ‘bagel’ and there were FORTY FIVE bagel variations on the damn menu. I’ve never seen a bagel for sale at McDonald’s in my life and they have 45 options!!

Once I’d figured out that this was supposed to be a bagel with cream cheese it didn’t make it any less vomit-inducing. Twitter user @BryanPassifiume, a reporter for the Toronto Sun, ordered ‘extra cream cheese’ on his bagel assuming he’d get a little more schmear. This is a normal assumption. A little more cream cheese was expected and would’ve been acceptable.

What they ended up serving him was a pile of cream cheese so large he went around and took pictures of the mountainous monstrosity next to everyday items so we could really get a feel of just how much damn cream cheese they threw piled onto his ‘bagel’.

Don’t get me wrong, I LOVE cream cheese. I often considered my Uptown H&H Bagels as merely a vessel for Cream Cheese or Butter. But this is overstepping the line. This is just….wrong

More photos of this monstrosity. I ordered extra cream cheese as they usually just apply it like butter, but this is clearly just an exercise in passive-aggressiveness. How do I possibly eat this? pic.twitter.com/XM70yMrnqp

Just to really drive the point home that this was an offensive amount of cream cheese he went around and photographed the mountain of CC next to things like a hockey puck, mini football, and more:

Since I obviously can’t eat this, I’m spending the morning comparing the girth of my McMonstrosity to items I find in the newsroom. Here it is next to my novelty Calgary Sun Stampeders football pic.twitter.com/pawjJSyrpk

My bagel is almost as big as tonight’s $70 million @lottomax jackpot pic.twitter.com/1Kzwq5P0YI

Almost as girthy as a regulation NHL hockey puck pic.twitter.com/RpWCIIRq1A

It’s the same height as an emergency naloxone inhaler turned on its side pic.twitter.com/UzqH0xwisY

I showed a few of these pictures to a colleague and he begged me to stop for fear of vomiting which is apparently a pretty common visceral response to this McDonald’s bagel with cream cheese, at least based on a few of these tweets:

Just looking at it makes me want to throw up

Keep eating a balance diet and exercise. Get your protein shakes for healing. Don't forget your probiotics. Vitamin C for healing.

That is a heart attack waiting to happen.

Used to work at a breakfast joint. Guy sent back order of bacon twice for being too soft. We threw it in the deep fryer until we forgot it was there. Looked like spent charcoal. Waitress came back and said he loved it.

The petulance of youth food industry workers knows no bound

Real talk: if you ordered a bagel with a little extra cream cheese from McDonald’s and they served you this would you go back and complain or would you take the route of this reporter and tweet it out for the viral clout? I have to think most people would fall into the latter category these days.