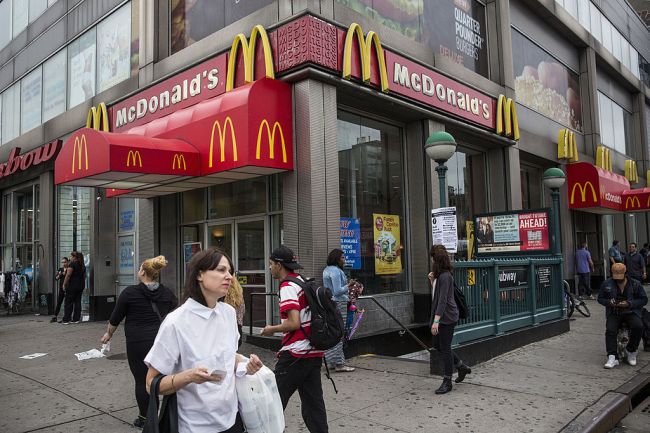 McDonald’s ice cream is a big deal for some people. I don’t remember the last time I ate ice cream at the Golden Arches.

It’s been a minute and my last McDonald’s ice cream purchase probably predates this woman buying this meal that lasted 24 years.

In fact, it’s been so long that I don’t know if McDonald’s still serves ice cream the way they did when I was a kid – in sundae form with hot fudge and nuts on top. ALWAYS nuts on top.

All I know about McFlurries are the cool spoon tricks used to make a McFlurry.

Even though my McDonald’s ice cream purchases are minimal, I do know the joke about the ice cream machines always being broken.

In an effort to prevent people from experiencing the disappointment of a busted ice cream machine, a guy developed an app that tells people which locations currently have malfunctioning machines.

“I’m currently placing an order worth $18,752 every minute at every McDonald’s in the US to figure out which locations have a broken ice cream machine,” he wrote in a tweet.

He later clarified his process saying: “Mcdonald’s keeps track which locations have a broken machine, I’m merely querying for those — no order gets executed, no ice cream is actually wasted.”

I reverse engineered mcdonald's internal api and I'm currently placing an order worth $18,752 every minute at every mcdonald's in the US to figure out which locations have a broken ice cream machine https://t.co/2KsRwAdrMd

to clarify how this works: mcdonald's keeps track which locations have a broken machine, I'm merely querying for those – no order gets executed, no ice cream is actually wasted 🍦

The app also shows the percentage of machines currently broken in different cities, like New York, San Francisco, and Chicago.

According to the app, all of the ice cream machines within a ten-mile radius of me are working just fine. Maybe today is the day I break my streak.

Now, Rashiq needs to create an app showing which locations are out of Travis Scott meals and the locations that aren’t baking masks into their food.

Better yet, I know parents would appreciate an app showing the locations with the best Happy Meal Toys so my kids don’t get the same crap every damn time.