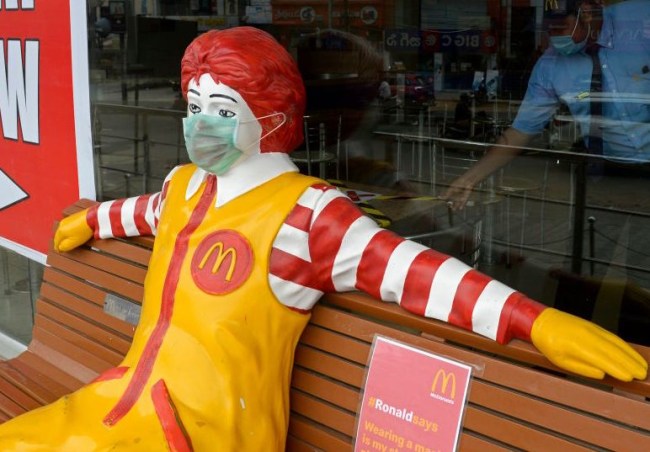 You’d think it would be universally acknowledged that we’d all benefit if everyone would just wear a mask in public for the time being, but sadly, that would require everyone in the world to actually agree on something for once. Would the planet actually collapse upon itself if that ever happened? Probably not, but I guess some people feel there’s no point trying to find out.

As a result, face mask drama has been one of the most idiotically controversial topics of 2020. There was the guy at Walmart who pulled out a gun to try to settle a debate over the issue, the lady who got thrown off of a plane for refusing to wear one, and the Army veteran who died after making fun of them, which is sadly a case that’s about as isolated as the illness itself.

Despite what some of the galaxy-brained Karens making a scene in public places would lead you to believe, the effectiveness of masks isn’t really up for debate. Look, no one wants to wear them, but the mild discomfort you have to deal with while wearing one isn’t enough to justify eschewing them entirely.

There are definitely other downsides that don’t come to close outweighing the benefits, and it seems like disposable masks have become the new cigarette butt in a fairly ironic twist based on how many people seem to be fine with discarding them wherever they want to. Regardless of how you feel about an issue that shouldn’t have two sides, and I don’t think suggesting masks shouldn’t be thrown on the ground is a super divisive issue.

You know what’s probably an even less controversial take? Face masks should not be found inside Chicken McNuggets, which is exactly where one McDonald’s customer claims she discovered one after buying her daughter a Happy Meal.

According to the BBC, a woman in England says she found a disposable mask inside a chicken nugget after her six-year-old-daughter choked after taking a bite, saying, “I had to put my finger in her mouth to make her sick and it came up all speckled with blue.” After the incident came to the attention of McDonald’s, the restaurant apologized and offered her a refund, which I guess is better than nothing.

I’m not lovin’ it, guys. This is just straight up disgusting. Watching this video of this woman picking apart the chicken nugget to find a mask inside actually made me gag.

At least we can rest assured that McDonald’s employees are wearing masks at work, but it would be ideal if they ended up in the trash can and not the food.