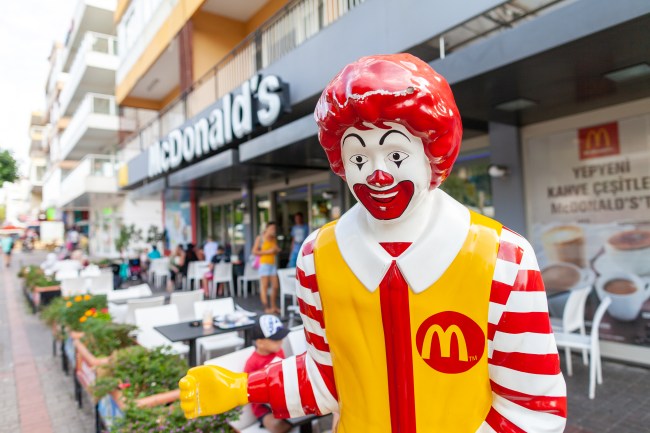 Now, before I dog McDonald’s for what’s described in the headline above, I’ve got a little disclaimer: I fucking love the place. Like, no joke, anyone who knows me can attest that I eat the fuck out of some Egg McMuffins pretty much anytime I get the chance to, always devouring two of them either before and/or after a long flight while traveling, or anytime I’m sort of between meals and need to eat between a brunch and late dinner.

That being said, let’s be honest, Mickey D’s isn’t exactly recommended by health nuts when it comes to trying to keep a balanced nutrition. Most of the menu’s full of fats and cholesterol and all that shit that doesn’t do your body any favors. But, fuck it, man, you only get once shot at living the life you want to, so I choose to eat Egg McMuffins from McDonald’s whenever I want. Can’t no one stop me from doing that!

Still, it baffles my mind at the shit that once existed in the ingredients. From complete crap mixed into the chicken nuggets to (presumably) non-disposable stuff in things like burgers and fries, I’m pretty much convinced that anyone who ate this shit in the ’80s and ’90s has some sort of alien growing inside them. Like, wow, what the fuck did we put into our bodies?

While some people have gotten smarter and are eating better — and restaurants, especially fast food, are promoting healthier options and ingredients — there’s no denying the fact that McDonald’s food might still be questionable. Case in point? This TikTok video from a lady who showed off a meal she allegedly bought 24 years ago; which is still intact nearly two-in-a-half decades later.

Shared on the TikTok handle @aly.sherb, an older lady displays a McDonald’s bag advertisement of NASCAR races in 1996, before carefully showing off french fries and a hamburger, describing how neither ever “rotted or decayed.” It’s quite the sight, and, oh man, fucking disgusting if legit.

But since this isn’t the first time something like this has been seen on the Internet — with a Utah man earlier this year showing off something similar, with his being a 20-year old burger — Anne Christensen, director of Field Brand Reputation for McDonald’s, helped try to explain what the fuck is actually happening here.

“In the right environment, our burgers, like most other foods, could decompose. But, in order to decompose, you need certain conditions — specifically moisture.”

She continued: “Without sufficient moisture – either in the food itself or the environment – bacteria and mold may not grow and therefore, decomposition is unlikely. So if food is or becomes dry enough, it is unlikely to grow mold or bacteria or decompose. Food prepared at home that is left to dehydrate could see similar results. Similarly, this particular burger is likely dried out and dehydrated, and by no means the same as the day it was purchased.”

It’s all pretty nasty, in my opinion, but you know what? None of this will stop me from scarfing down McDonald’s anytime I get the urge to put some disgustingness into my body. Go ahead and judge me if you want to.