Some Guy Saved A McDonald’s Cheeseburger And Fries For 6 Years, Put It On eBay, And Got Bids 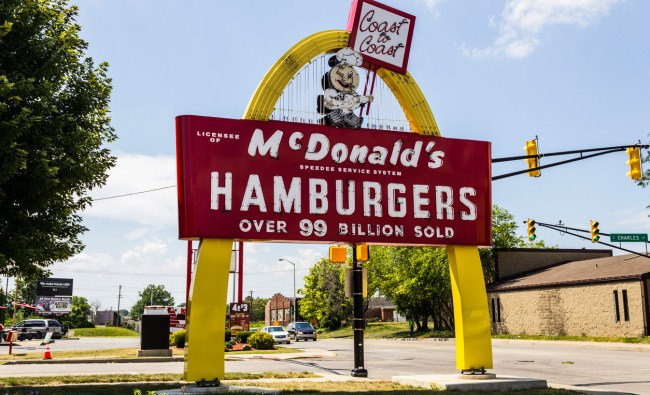 A farmer in Canada bought a cheeseburger and fries from McDonald’s six years ago and placed them on a shelf. Last week, he put them up for sale on eBay. And got bids.

Why would someone bid on a six-year-old burger and fries? Well, for one thing, they haven’t really aged that much. Take a look…

Then again, maybe someone bid on them because the chemical in McDonald’s french fries is supposed to cure baldness. Or not.

Regardless of the reason, Dave Alexander from rural Ontario, had to be thrilled to have received a $82 bid with a over six days left in his auction.

His starting bid was $29.99, and as he put it in the description, the burger and fries are “surprisingly decent looking still.”

“This is no joke. This is a legitimate, very real McDonald’s Cheeseburger & Fries that we bought in London, Ontario Canada on June 7, 2012. ORIGINAL OWNER – Never eaten,” he wrote in the eBay description.

“The fries are stunningly good looking. The fries look like they were purchased this morning,” Alexander told CBC Radio. “The burger itself has darkened a little bit. The bun is about as hard as a hockey puck, but it looks just like it’s brand new cosmetically.”

Alexander said the reason he hung on to the burger and fries so long was because he wanted to see if the urban legend about fast food burgers lasting for years was true.

Turns out that it is.

“It basically has petrified itself. It looks very sellable,” said Alexander. “I’m going to assume that someone’s going to rehome my cheeseburger.”

Unfortunately for Alexander, eBay took down his listing before he could cash in because it didn’t have an expiry date.

It was NOT being sold as edible food and restaurant food doesn't come with an expiry date as far as we are aware. So, they are requiring something that is impossible to provide and doesn't exist. This must be corporate pressure.

Too bad. It’s still in such good shape.

“We live in the country and we’ve never seen a fly land on it. Ever,” said Alexander.

Apparently, even the flies know better.