McDonald’s Just Dumped Some Big News On Us: The McRib Is Making A Comeback 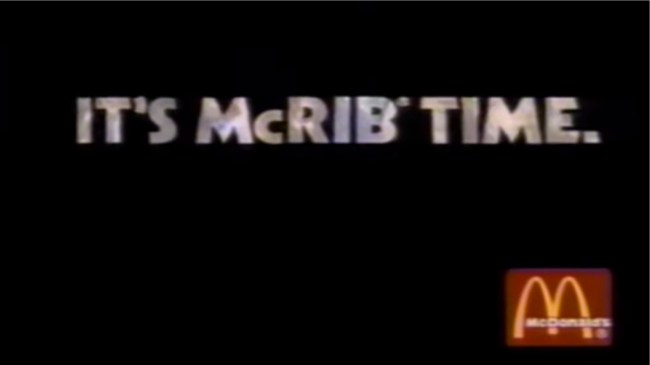 And you thought that McDonald’s had retired and checked the McRib into some long lost fast food sandwiches old folks home, did you? Well, guess what, you’d be wrong, because the burger chain just announced that the BBQ-slathered sandwich is making a comeback this year, so all bros should be doing some sort of dance right now to celebrate.

Thing is, if you want to scarf down the McRib, you better do it fast, because, just like that, McDonald’s could pull it from the menu, setting it aside for a rainy day sometime down the road… or not, we don’t know. That’s because, according to the restaurant’s official website, it describes the McRib like this:

The McRib might not be around all year, but it’s a must eat treat when it is! Try the tasty fan favorite, slathered in tangy barbecue sauce and topped with slivered onions and tart pickles, all on a hoagie style bun, when available.

That last part, though: “when available.” Talk about a serious tease.

After first making an appearance on the McDonald’s menu all the way back in 1981, the McRib has developed somewhat of a cult following, with people even going as far as pleading with their city council to feature the sandwich on their local menu — something I really wish I was kidding about that. Not only that, but there’s a F’in website called McRibLocator that tracks the latest sighting of the thing. People, man, you’ve got to love ’em.

First introduced in 1994 by McDonald’s, the McRib went on hiatus because of miserable sales — I guess the world just wasn’t ready for all that pork doused in BBQ sauce. But, in 2010, the McRib was teased in a commercial, and, since then, it has typically made a return to a McDonald’s menu each fall since.

According to The Takeout, the 2018 comeback of the MCRib will be available in 9,000 of the nearly 14,000 McDonald’s stores, so you best scrounge up some loose change and get your ass down to Mickey D’s soon in order to get your fill this year.

In the meantime, just go ahead and enjoy these paid actors housing a McRib for the first time back in 1994.

Yeah, I think I know what I’m eating for dinner tonight; gimme that McRib.