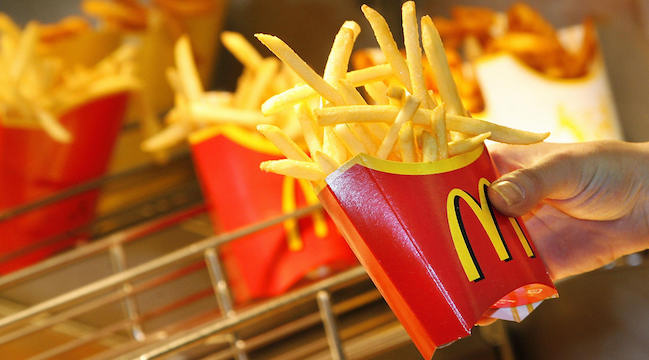 My first experience with gambling came at a fairly young age when I was introduced to McDonald’s Monopoly. For the first time in my life, I got to experience the thrilling rush that came along with every supersized fry and oversized soft drink I ordered, knowing that I might be just a couple of games pieces away from winning a car I wouldn’t be able to drive.

Dopamine is a hell of a drug.

However, I’m far from the only person to be consumed by McDonald’s Monopoly Madness. YouTube person Furious Pete drove up to a Canadian McDonald’s  and placed an ordered for a hundred large fries (and a single Diet Coke), freaking out a prepubescent worker manning the takeout window in the process. It took Pete close to an hour to get his order, but he eventually returned home with two boxes filled with fries and 202 chances to win after shelling out over $340.

Pete and his wife quickly got to work on peeling off the game pieces. After tallying up the total, the two had accumulated 23 free food items— the majority of which were cheeseburgers. According to the official rules, they had a 1 in 481,442,760 chance at winning the $150,000 top prize, so maybe he should have gotten a second Diet Coke just for good measure.