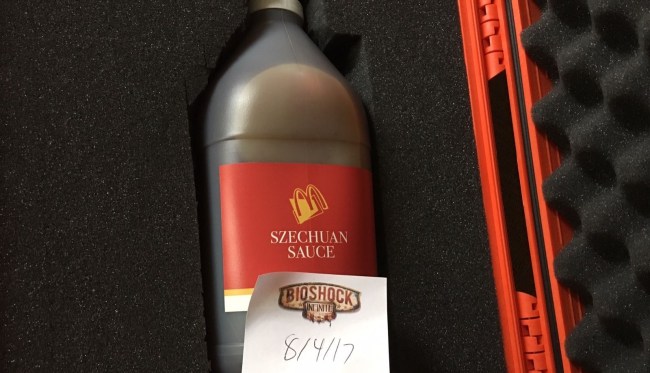 In 1998, McDonald’s released a limited edition Szechuan dipping sauce to accompany its McNuggets to coincide with the release of Mulan. The sauce was eventually discontinued and basically faded out of the public consciousness until it became the focus of an episode of “Rick and Morty” a few months ago. Because neither “Rick and Morty” fans nor the internet can react reasonably to things, people quickly became obsessed with the sauce.

Some attempted to make their own version of the sauce, while one person purportedly shelled out over $14,000 for the honor of owning a packet. A lead corporate chef at McDonald’s teased the sauce might be making a return, but there were no new developments until “Rick and Morty” creator Justin Rolland received a briefcase containing a 64 oz jug of the much sought after condiment at the end of July.

McDonald’s then launched a contest promising to give away three more bottles, and one of the lucky recipients is auctioning off their prize on eBay.

What would inspire someone to give away what is essentially the Holy Grail of McDonald’s dipping sauces? Money. The answer is “money.” The man selling the sauce says that he plans to use the proceeds to pay off some bills, but it’s worth noting that he’s promised to donate at least 20 percent of the final bid to charity.

He also clarified that he didn’t want to think McDonald’s (and the corporate chef responsible for bringing it back) to think he was disrespecting them by selling the sauce, saying:

I hold McDonald’s and Chef Mike in the highest respect. I really do. Mike has done an amazing job bringing this back for some lucky people to enjoy and I will do everything in my power to assure that it’s in the hands of someone that will truly enjoy it with a party of people, instead of just letting it rot away on a shelf for all to see. The point of this sauce is for people to enjoy it – not necessarily me, but whoever ends up with it. No matter what amount it ends up at, I hope it ends up in the hands of someone that will thoroughly enjoy it. Good luck to all and let’s do some good!