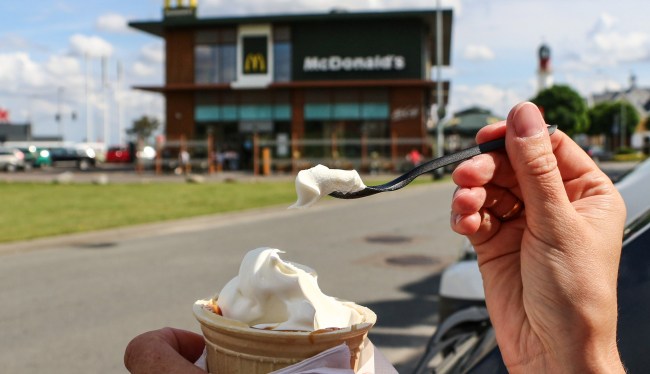 McDonald’s ice cream machines have long been the butt of jokes because, well, they are almost without fail (at least it seems like it) broken.

This has literally been going on for YEARS and has become so commonplace that even Wendy’s feels comfortable making fun of McDonald’s over it.

Now, however, Tyler Gamble a franchisee and member of McDonald’s National Supply Leadership Council equipment team, says that it all about to change!

Where have we heard that before?

According to Gamble, “I will not feel that my tenure as your equipment lead has been a success unless we find a way to ensure that McDonald’s is no longer the butt of the joke, even with their own social media team.”

Gamble also told Business Insider that he created a new McFlurry-focused task force at the annual National Owners Association meeting in October and “no idea is off the table at all.”

Also in October, a new app called McBroken was released and went viral that shows in real-time which McDonald’s ice cream machines are currently broken.

That app followed in the footsteps of another app called Ice Check, released in 2017, that, you guessed it, checks McDonald’s locations to see if their ice cream machine is operational or not.

So to say this broken ice cream machine issue is something McDonald’s needs to address would be an understatement.

As McDonald’s VP of Communications David Tovar tweeted in October when confronted with just how widespread the problem is, only true McDonald’s fans would go to these lengths to create an app tracking the broken ice cream machines. (That, or they just can’t resist finding out if the widespread and often repeated joke was actually true.)

Does this check out, @McD_Truth?

Only a true @McDonalds fan would go to these lengths to help customers get our delicious ice cream! So, thanks! We know we have some opportunities to consistently satisfy even more customers with sweet treats and we will.