The Carnivore’s Guide To Beating A Meat Shortage 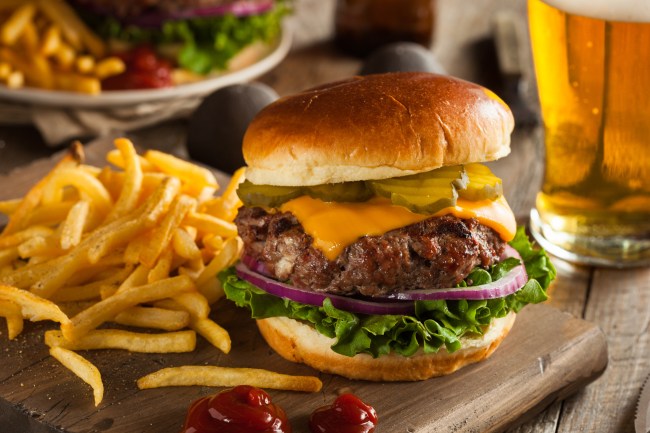 The United States is on the verge of getting back to some level of normalcy after this godforsaken lockdown caused us all to lose our jobs, businesses, and arguably our sanity. But we are beginning to come out on the other side of an unsavory situation, one that, in some places, threatened to cut off the booze supply and made it difficult as all get out to find a stinking roll of toilet paper. But don’t you dare test the resolve of the American people. No sir! Against all odds, we still found ways to keep our butts clean while we stumbled around our respective abodes drunker than shit. Hey, it was fun while it lasted, but we are more than ready to come out of hiding, and that bleach-slinging President of ours thinks it’s about time we get on with it.

Regardless of whether loosening social distancing restrictions is a good idea or not, many Americans have already started to venture out of the house to see if some lung-thirsty bug will catch up with them. Masks be damned! They’re having huge house parties, the beaches are packed and, well, basically nobody gives a flying fuck anymore, they just want out. We feel their pain.

Still, more problems are on the horizon due to this wild-eyed state of pandemica that has us more than a little unnerved. Forget about the possibility that millions of people could find themselves snot-nosed and fighting for air, the word on the street is that we could soon be facing a meat shortage. Processing plants across the country have been forced to shut down as a result of this bug and, according to John Tyson, chairman of Tyson Foods, the largest meat company in the country, “the food supply chain is breaking,” and supermarkets are running out of meat.

It means Americans could be spending Memorial Day and Fourth of July this year chowing down on carrot sticks instead of burgers and dogs. My god, what’s going to happen to the sanctity of the nation once a carnivorous society is all of a sudden forced to become vegan in patriotic times? We’re talking anarchy here, folks! There’s no way in hell’s holy name that any bug or government official is about to call off the Summer grilling season without catching an ass-whooping.

But we would be remiss to say that everything’s going to be alright. I mean, how’s America going to run out of meat? But if we’ve learned anything throughout this insane debacle, it’s that anything is possible, especially when it comes to maintaining our creature comforts. It is for this reason that a meat-eating population might need to get serious about hashing out a Plan B for when the only protein the supermarkets have left is bologna. Below are a few ideas to help get you started.

Talk To Your Local Butcher Shop: One of the most immediate ways to combat the impending meat shortage is to bypass the grocery stores altogether. You could spend time contacting local farms to see if they will sell meat directly, or you could just lean on your local butcher shop for their contacts. If it’s burgers, steaks, and roasts that you cannot live without, all you have to do is tell them that you’re interested in purchasing a whole, half, or quarter cow. This allows a customer to get a variety of cuts all at once that he or she can store in a deep freezer. Fuck the supermarket.

However, while it is cheaper in the long run to go this route, the initial investment can be steep. A sizable deep freeze can run anywhere between $500-$1000. And buying a whole cow (enough meat to feed a family for several years) is expensive, as well. It can cost $2,000 or more to get one with your name on it, but it will produce hundreds of pounds of meat. We recommend seeing if three or four friends or family members want to go in on it with you to help offset the expense.

What really makes buying a whole cow a cost effective option is the customer usually gets to call the shots on how it is cut. So, yeah, please give me all the Porterhouse steaks that bastard can make!

Our best advice is to try and find a butcher that vacuum seals the meat before you pick it up. That way, all you have to do is toss the packages in the deep freeze when you get home. Easy and done.

Online Butcher Shops Ship To Your Door: Just the same as America has looked to the Internet during this health crisis for beer, wine and spirits, you should know the meat game isn’t any different. There are several butcher subscription services out there that sell some of the best meat on the market – all of which are sourced by local farms and not large facilities affected by the shutdown.

Some of the more reputable providers are Porter Road, Holy Grail Steak Co, Snake River Farms and D’Artagnan Food, according to a recent article from Forbes. These sites are where the serious carnivore can get his or her hands on “100% pasture-raised beef, pork, lamb and chicken,” Kobe beef, Wagyu beef, and all things organic that used to walk around mooing, clucking and oinking.

Raise Your Own Livestock For Meat: While it might sound ridiculous to suggest that America has reached a time when it might be beneficial for more of the population to raise their own meat, it’s not that far-fetched. Despite any meat shortages that may happen now or in the future, there’s still plenty of reasons to consider it. We have learned over the years that the larger processing plants are leading animals to slaughter in less than favorable conditions. Many advocates argue that the stress of being mistreated and not living as they were intended affects the quality of the meat. Some believe that the stress of the animal essentially becomes our stress, which can lead to all sorts of life-threatening maladies, including cancer. It’s the animals allowed to roam freely in their natural element that puts quality meat, eggs and milk on the table.

So, If a person has plenty of acreage at home, raising livestock might not be a bad way to go. If you live in Manhattan, not so much.

A new farmer can expect some high startup costs when choosing to go down this road. There are coupes and fences that will need to be either purchased or built, the animals themselves, veterinarian bills and ensuring the livestock get the proper nourishment they need to get healthy and strong. Just in case you are curious, you can get a 300 lb. calf for around $300. Remember, you’re going to eventually need to haul that sucker to a finishing operation to have it turned into ground beef and steaks. So a truck and trailer is another added expense. Of course, starting a small farm right now will not feed you this summer – it takes a long  damn time before a cow is ready to eat. But for the diehard carnivore who never again wants to be threatened by a meat shortage, those wanting to become more self-sufficient, raising animals is worth exploring. Our only advice is to never give the animals a name. It’s a lot harder to kill your pets.